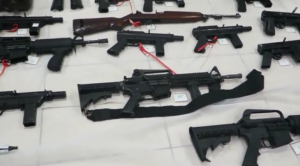 Terror groups underwent a serious setback with the closing of 16 underground weapons manufacturing workshops, and IDF’s seizure of 200 weapons, ammunition & grenades that Palestinian terrorists would have used in future attacks on Israelis.

The Israeli army has closed 16 Arab weapons factories in Judea and Samaria in a major crackdown an IDF officer said on Tuesday.

“As part of our war against the production of homemade weapons, we have seized 200 weapons, ammunition and grenades and closed 16 illegal workshops since early 2016,” Colonel Roman Gofman said.

In a conference call with reporters, he said the campaign also targeted Palestinian shops selling firecrackers, which can be used to make grenades and improvised explosive devices.

“Our operations have led to a surge in the price of weapons in general,” Gofman said.

As a result, he said, those in charge of workshops now “think twice before selling their weapons to terrorist groups in the knowledge that the Israeli army is after them”.

The colonel declined to give details on the extent of cooperation between the army and the Palestinian Authority’s security forces in the fight against the production and trafficking of weapons in Judea and Samaria.

The Hevron area has been one of the main focuses of a wave of deadly Arab terror attacks that has rocked the country since last October.