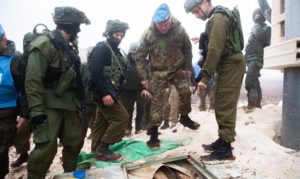 An unnamed security official told i24NEWS that the man who appeared on the video from the tunnel was Dr. Imad “Azaladin” Fahs, a commander of the Hezbollah observation unit on the border with Israel, as well as a commander in the tunnel unit.

The IDF identified the man fleeing the tunnel as Dr. Imad “Azaladin” Fahs, a senior Hezbollah member who commands its recon and tunnel unit.

“Azaladin” who is in his 30’s, has a PhD in mechanical engineering from Tehran’s University of Technology and is married with two children.

According to the security official, “Azaladin” trained with Mexican drug cartels near the United States border.

Residents in southern Lebanon received text messages from Hezbollah, presenting two options; either cooperate with Hezbollah or evacuate from the area so as not to get involved in a future war.

i24NEWS source thus disputes the claim from Hezbollah which said the two men in the tunnel were drug dealers.

IDF on Tuesday announced it had launched an operation, dubbed “Operation Northern Shield” to prevent and destroy underground tunnels dug by Hezbollah from Lebanon into Israeli territory.

On Thursday, a second tunnel was uncovered by the IDF, stretching from Lebanese village of Ramyeh into Israeli territory near the village of Zarit. The first tunnel was discovered in the northern Israeli village of Metulla.

The IDF said that Israel has seen over the years a concerted effort by Iran-backed Hezbollah to dig such tunnels, though emphasized that none were yet operational nor posed an imminent threat to Israeli civilians.

“The digging of the cross-border attack tunnels that the IDF has discovered, before the attack tunnels became operational and posed an imminent threat to the safety of Israeli civilians, constitutes a flagrant and severe violation of Israeli sovereignty,” the army said in a statement.

“The Hezbollah terror organization, which is responsible for digging the crossborder attack tunnels, continues its activity that is supported and funded by Iran, to establish its terror infrastructure against Israeli civilians.”

Israeli Prime Minister Benjamin Netanyahu led a group of ambassadors on Thursday through a tour of Israel’s north, urging them to “condemn the aggression unequivocally and intensify the sanctions” against Hezbollah.

The cross-border tunnels “are wider and larger, and their goal is to transfer battalions, large forces, into Israeli territory, in order to come in and carry out a killing spree and kidnappings and to capture villages,” the Israeli premier stated.

“Anyone who attacks us — is taking his life into his hands,” Netanyahu portended, later suggesting that Israel may take action against Lebanon, which he demanded “stop granting permission to use its territory for these attacks on Israel.”

“We are denying our enemies the weapon of tunnels systematically and decisively,” he told the ambassadors. “What we are doing with Hamas and with Hezbollah as well — we’re doing everything we need to do.”

Never remiss in raising the ultimate foe, Iran, he hailed Israel’s great efforts as the single army in the world to take it on.

“What we’re facing is one big enemy. That enemy is called Iran,” Netanyahu said.

‘We will act as much as whoever attacks us, with a target on his head. I told the ambassadors that they should condemn the aggressions of #Iran, Hezbollah and #Hamas unequivocally,’ Israeli Prime Minister @netanyahu said on the #Israel-Lebanon border: #NorthernShield pic.twitter.com/KKwfjSsV23

Meanwhile, the head of IDF’s northern command Maj. Gen. Yoel Strik met with his counterpart from United Nations Interim Force in Lebanon (UNIFIL), Major General Stefano Del Col on Thursday, presenting him with visuals of houses in southern Lebanon where the cross-border tunnels are being dug from leading into Israeli territory.

Strik also requested that UNIFIL will ensure the neutralization of the attack tunnel on its Lebanese side.

“The IDF holds the Lebanese government, the Lebanese Armed Forces and UNIFIL responsible for all events transpiring in and emanating from Lebanon and for the implementation of resolution 1701,” the IDF said in a statement following the meeting.

UNIFIL “visited a location near Metula in northern Israel”, it said in a statement, and “can confirm the existence of a tunnel at the location”.

Netanyahu addressed the work of UNIFIL to the ambassador’s on Thursday, calling on the force to expand its role on the Israeli-Lebanese border.

“UNIFIL should expand its role, because evidently it’s not been done. UNIFIL is supposed to monitor, at the very least monitor if not stop, the transfer of weapons into Lebanon, into south Lebanon,” Netanyahu said.

“And you know there were 15,000 rockets and missiles at the end of the Second Lebanon War. There’s about ten times that and we haven’t seen a single case, a single filing of a complaint or report by UNIFIL,” he added.

The Israeli Prime Minister also touched on the subject of an escalation as a result of “Operation Northern Shield”, which his Lebanese counterpart Saad Hariri downplayed.

“We’re going to destroy more (tunnels). My goal was first of all to dismantle these terror tunnels without getting into broad escalation. We passed a clear message of what we’re doing and so far I can’t tell you that the risk of escalation doesn’t exist but I don’t think it’s quite as… If you pass the first 24 or 48 hours, and we are there, without an escalation, I think the risk is much lower,” Netanyahu said.

“It exists, we’re ready, we’re deployed, we’re all ready to go if we have to, but I’m not sure that Hezbollah will make the terrible mistake of testing our resolve and our preparedness,” he added.

Netanyahu also said that Hezbollah would most likely condemn Israel for being the aggressor, and that Israeli jets are flying over Lebanon frequently.

“So the answer (to that) is, first of all, we’re not the aggressive power, we didn’t say that we want to destroy Lebanon and this is not, our life’s goal is not to eradicate the people of Lebanon off the face of the earth. But that’s the goal of Hezbollah vis-à-vis the Jewish State of Israel,” he said.

“Second point is that we have a perfect right of preemptive self-defense to survey and collect intelligence against those who openly declare their goal to destroy us, and we do so. But what they’re doing is actually invading our ground, our territory. That’s what they’re doing and you can’t make a false symmetry between these two things,” Netanyahu concluded.

This exclusive was revealed by i24NEWS defense correspondent Matthias Inbar.