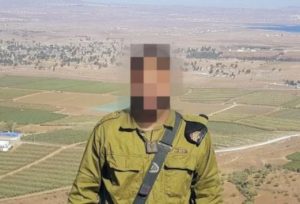 Staff Sgt. A., 21, is deployed in the Golan Heights as a medic with the 77th medical platoon in the IDF’s Armored Corps.

“It makes you a different person, being in the TAGAD (battalion aid station). Helping people makes serving here really meaningful, and it’s fun to help people,” A. says.

“At home, I don’t talk much about what I do, but my family is very proud. But still, there’s nothing like hearing ‘Thank you very much’ in Hebrew and in Arabic. There are mothers who actually cry over the help their children get because they’re so moved and appreciative.”

Before becoming a medic, A. dreamed of serving in tanks. Today, he declares that “there’s no way I’m leaving,” despite the difficulty of dealing with wounded from the bloody Syrian civil war, which appears to be far from over.

“We received a wounded guy who had been hurt by a mortar shell on his car,” he recounts. “He was in critical condition, but we stabilized him and saved him from cardiac arrest. I’m always worried they won’t want me to treat them because I’m Druze and, in their eyes, a traitor, but to me, they’re human beings before anything else.”

The most important thing, A. says, is not to develop feelings for the wounded who arrive. But there was one boy, about six years old, who captured his heart.

“He came in about two months ago, after being seriously wounded by a bomb that exploded when he was in a cave with his shepherd parents,” he says.

“We treated him, and when we were done we transferred him to an army ambulance that took him to a hospital for further treatment. The mother stayed with us and begged us not to leave him for a moment, but that was impossible.”

When asked if the “Zionist enemy” seems less evil when people cross over the border to seek help, A. says, “I see the fear in their eyes. The mothers, especially, are frightened, but slowly you can see how they allow themselves to relax.”

A.’s family is originally from the Sajur region. His grandparents were born in Israel, but their extended family is still in Syria.

“When I meet the wounded, I don’t tell them who I am or anything about myself,” he says. “I just go up to them and say in Arabic, ‘Hi, my medical team and I are here to help you,’ and then just treat them.”