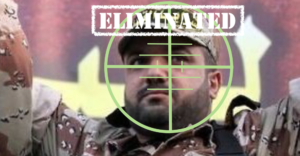 The Iranian-backed Palestinian group confirmed Tuesday that Abu al-Atta, its north Gaza Strip commander, was killed and vowed to avenge his death.

Schools will remain closed Tuesday in the Gaza border area, in the cities of Be’er Sheva and Ashkelon and across the center of the country.

This is the first incident of targeted killing by Israel since the end of the 2014 Gaza conflict, Operation Protective Edge.

The IDF Spokesperson’s Unit released a statement confirming the attack was a coordinated effort by the IDF and the Shin Bet security agency.

Gaza’s Health Ministry says a man and a woman have been killed in the blast and two other people were wounded.

The airstrike damaged the half of the second and most of the third floors of a house in the Shejaeya neighborhood east of the city.

The IDF video below highlights the rise of the terrorist organization Islamic Jihad and how it became a top target by the IDF in combatting the terror enclave, the Gaza Strip.