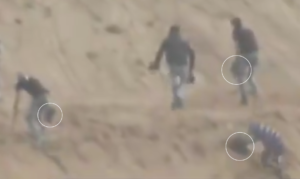 In response to the incident, the IDF attacked a training camp in Rafah, a Hamas-ruled terrorist target, an IDF spokesperson announced also on Saturday.

“The IDF views any attempt to harm security infrastructures and the security fence as any violation of Israeli sovereignty above and below the ground,” said the statement.

Israel holds the Islamist group that governs the coastal enclave solely responsibly for all activity in Gaza.

The IDF also warned against incidents that are referred to as “demonstrations” but “cover for damage to security infrastructures and an attempt to harm Israeli civilians or IDF soldiers,” the statement added.

“We will continue to respond harshly to any such attempt.”

The day’s earlier incident appeared to be an attempt to damage equipment being used to construct an above- and below-ground barrier along the Israel-Gaza border, revealed in video footage from al-Jazeera.

The Israeli military has been working on constructing the underground barricade over the past year and it is expected to be completed within months, according to a December report.

A fence already stands along the border but Israel is working to reinforce it and, in addition, construct a new wall, with space between the two to allow for tank deployment and other military vehicles. The barrier is intended to prevent weapons smuggling and infiltration by Gaza militants.

The six-meter high wall will have sensors to detect underground activity, dozens of meters deep into the ground.

The project is estimated to cost some $833 million.