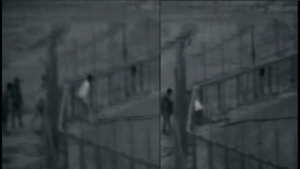 The Israeli military on Sunday said it located two improvised explosive devices next to the Gaza-Israel border, which it said were planted by three militants seen penetrating the perimeter fence earlier in the day.

“Following the earlier report regarding the suspects who infiltrated [into] Israel through the security fence near the Northern Gaza Strip, IDF troops located two explosive devices placed by the terrorists at the scene,” an Israel Defense Forces statement said.

Earlier, the army said it fired at the three men after they were spotted, and that they hightailed it back inside the Hamas-run enclave.

Palestinian news agency Maan said that an Israeli tank fired twice towards the Strip, however the Israeli military said it only used small arms fire.

The Israeli military said that “three suspects crossed into Israel in the northern Gaza border area and returned to Gaza. The IDF fired towards them.”

It added that the army “will not allow the region to become a combat zone” and that it viewed the incident with “great severity.”

A picture distributed by the army showed two large plastic bottles containing a yellow liquid and an attached electronic device.

In February, a bomb planted near the border fence detonated under an Israeli patrol vehicle, prompting a large-scale Israeli aerial attack on Hamas targets in Gaza.

The Gaza border has been the scene of furious demonstrations over the last two weeks, during which at least 29 Palestinians were shot dead by Israeli fire.