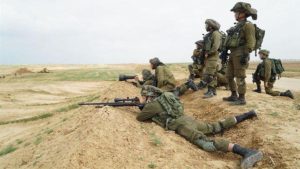 IDF responds to attacks with snipers, tanks killing 16 Palestinians on Friday, for which PA autocrat blamed Israel “for the deaths of the martyrs in Gaza,” declares a day of mourning.

Authority (PA) chairman Mahmoud Abbas on Friday evening blamed Israel for the deaths of Gazans who took part in the large-scale “March of the Return” towards the border with Israel.

“I express my pride in the sacrifice of the Palestinian people today. I place the responsibility  today on Israel,” Abbas declared in a televised address.

“The occupation army attacked non-violent demonstrators who went out to mark Land Day and to emphasize that they adhere to their right to self-determination. Today’s processions are proof that the Palestinian people will not lend a hand to any plan meant to eliminate the Palestinian issue and that Jerusalem will remain Arab,” he continued.

The PA chairman further said that he had instructed the PA envoy to the UN “to demand international protection for the Palestinian people from the Security Council and the UN.”

Abbas also said that Saturday will be a day of mourning for those killed in Friday’s march.

The UN Security Council will hold closed-door talks later on Friday about the situation in Gaza, a diplomat said, according to AFP. The meeting will be held at the request of Kuwait.

At least 30,000 people took part in Friday’s mass demonstration, according to IDF Spokesman Ronen Manelis. The protesters burned tires and threw firebombs and rocks at the border and at IDF forces.

Sources in Gaza said at least 16 people were killed in the clashes that ensued.

Later on Friday, the IDF thwarted an attempted shooting attack by a terror cell in northern Gaza.

During the attack, two terrorists approached the security fence and fired towards IDF troops, the IDF Spokesperson’s Unit said in a statement.

In response, IDF troops immediately fired according to the rules of engagement, targeting the terrorists as well as three nearby terror sites belonging to the Hamas terrorist organization with tank fire and IAF fighter jets. No injuries were reported and no damage was caused.