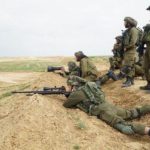 IDF responds to attacks with snipers, tanks killing 16 Palestinians on Friday, for which PA autocrat blamed Israel “for the deaths of the martyrs in Gaza,” declares a day of mourning.

Authority (PA) chairman Mahmoud Abbas on Friday evening blamed Israel for the deaths of Gazans who took part in the large-scale “March of the Return” towards the border with Israel.

“I express my pride in the sacrifice of the Palestinian people today. I place the responsibility  today on Israel,” Abbas declared in a televised address.

“The occupation army attacked non-violent demonstrators who went out to mark Land Day and to emphasize that they adhere to their right to self-determination. Continue Reading »

Although a Hamas organizer of the demonstration emphasized it will be “peaceful & nonviolent,” Israel considers the border area a ‘closed military zone’, so an IDF commander said live fire will be used, if the protesters threaten Israeli lives.

Masses of Palestinians are expected to come to the Gaza border on Friday and move into tents there for a planned six-week-long protest “to demand the right of return to the homes and villages that they were expelled from in 1948,” Ahmad Abu Ratima, an organizer of the protest, told The Jerusalem Post on Wednesday.

The beginning of the protest on Friday is scheduled to coincide with Land Day, which Palestinians annually commemorate the six Arab-Israelis who Israeli security forces killed during demonstrations in 1976 over government land confiscations in northern Israel. Continue Reading » 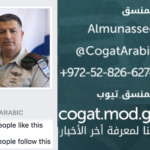 In addition to Israel’s security monitoring on social media of what is happening in the Palestinian territories, IDF’s COGAT unit is using a Facebook page to publish embarrassing details about senior Hamas officials for all to know, in its psychological warfare against Hamas leadership in Gaza, targeting in particular, its new leader, Yahya Sinwar.

Facebook has served as a platform for digital warfare between Israel and Hamas for years, but that has recently taken an interesting turn.

About two years ago, the Coordinator of Government Activities in the Territories (COGAT), Major General Yoav Mordechai opened an Arabic-language Facebook page called al-Munnaseq (the coordinator), which serves as a method to bypass the Palestinian leadership and communicate directly with the Palestinian population. Continue Reading »

An IDF tank retaliates and fires at a Hamas position in Gaza; no IDF forces injured after reporting shots fired at them along the border with Gaza.
– Gun fire was also reported on Tuesday by IDF forces along the Lebanese border near Metula in the Upper Galilee; no injuries or damage were reported.

An IDF tank shelled a Hamas outpost in the center of the Gaza Strip on Tuesday in retaliation for two incidents of shooting at IDF forces earlier in the day.

No soldiers were injured and no damage was reported in the shooting, which took place towards soldiers along the border of the strip with Re’im, a nearby kibbutz. Continue Reading »

After IDF soldiers fire warning shots, Palestinian kite returns to Gaza side of the border.
• In a routine check, Border Police prevent a Palestinian headed to commit a terrorist attack on security forces.
• PM Netanyahu sends message to Israel’s enemies: Every “drizzle” of rocket fire onto Israel will be met with a deluge.

Israeli soldiers on duty on the Israel-Gaza Strip border spotted something unusual in the sky on Saturday morning, and discovered a kite equipped with a camera coming toward them from the direction of Gaza. Continue Reading »

Another Palestinian terrorist wounded whilst placing explosive on Israel’s security fence with Gaza.

IDF forces foiled a terror attempt from Gaza on Saturday, shooting and wounding a 22 year old terrorist who was trying to place an explosive on the border.

According to the IDF: “this morning terrorists attempted to conceal an explosive device in order to attack IDF soldiers who operate in the proximity of the security fence in the southern Gaza Strip.”

5 IDF soldiers wounded in an explosion as they worked along the Gaza border fence destroying a tunnel. 4 terrorists from Hamas were killed in the ensuing gun battle.

Five IDF soldiers were wounded near the city of Khan Younis in southern Gaza on Thursday evening.

The IDF Spokesperson’s Unit said in a statement that terrorists detonated an explosive device as IDF soldiers were working to blow up parts of the terror tunnel that was recently discovered by IDF soldiers, leading from Gaza into an Israeli kibbutz.

As the soldiers crossed the border fence, the device was detonated, wounding the five soldiers – one seriously, one moderately and three lightly. Continue Reading »

According to Palestinian sources from Gaza, mortars fired from Strip on IDF forces. Hamas terrorist killed & another injured from IDF tank fire.

Palestinian sources reported Thursday evening that mortars were fired from Gaza in response to the limited entry of IDF forces into the Hamas-ruled coastal enclave, near the security fence. According to the sources, an IDF anti-tank shell was fired toward an are located east of the city of Khan Younis in north Gaza.

The Palestinians further reported that during exchanges of fire between terrorists and IDF forces near the city of Abasan in south Gaza, a Palestinian terrorist was killed and another was wounded, apparently from IDF tank fire. Continue Reading »

As Gaza Terrorists fire 132 rockets into Southern Israel in 24 hours since IDF launches operation to root out terror, the IAF hits over 100 terror targets in Strip

Gaza terrorists continued to fire rockets into southern Israel on Thursday morning killing three people and injuring two others in Kiryat Malachi. In total, some 132 rockets have been fired from Gaza into the South in the 24 hours after the IDF launched a campaign Wednesday to root out the terror infrastructure in the coastal territory, beginning with the targeted killing of Ahmed Jabari, the chief of Hamas’s military wing. Continue Reading »

Terrorist snipers fired at Israelis along the Gaza border over the past few days. UAV fires, hits them.

An IAF Unmanned Aerial Vehicle (UAV) fired at a squad of terrorist snipers in northern Gaza Monday. The squad was one of the terror cells that have been firing at Israelis in the past few days. On Sunday, the snipers fired at a farmer and later at an IDF force.

The IDF identified hits on target.