“The scenario that we are preparing for is a multi-pronged terror threat directed against our forces and civilians in the Eilat area,” Col. Arik Chen, deputy commander of Division 80 (the Red Division) said Thursday. Division 80 controls Israel’s longest expanse of border, across from both Egypt and Jordan. His comments take on added relevance amid the preparations for the Passover holiday, when tens of thousands of visitors and tourists are expected to hit the beaches of Eilat and the Dead Sea area. 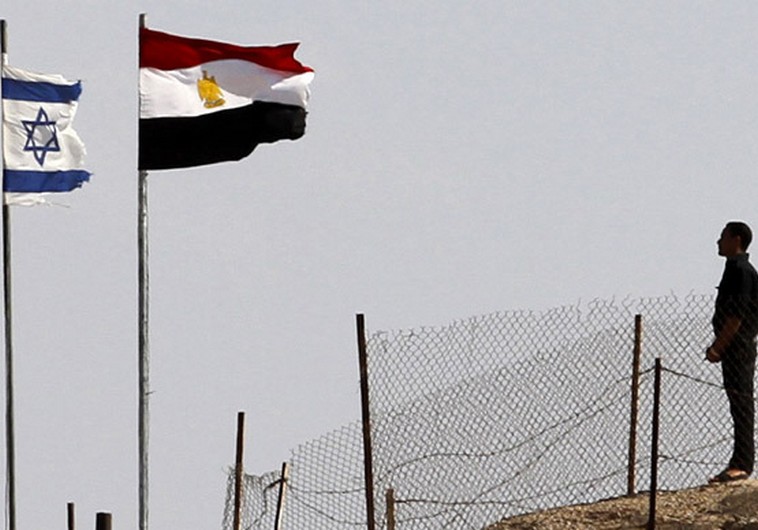 An Egyptian soldier stands near the Egyptian national flag and the Israeli flag at the Taba crossing between Egypt and Israel. – Photo: REUTERS

“In the past, we have seen incidents in this area,” he told military corespondents. “The scenario is a multi-pronged attack, not just at one site, and we will likely have to deal with this challenge without prior warning.”

He said that “our mission as a division is to ensure a feeling of security and routine in the area. Whether it is in Eilat or Nitzana. The operational challenges are very complicated, because on the one hand you have here a peaceful border, and on the other hand a frontier area in Sinai has developed that enables terrorist groups to grow like Ansar Bayit al-Maqdis which became an ISIS affiliate. This organization, as we have seen recently, creates a number of terror attacks against the Egyptian army, and this is one of the more bothersome challenges which we are preparing for.”

The mission of the Division, in addition to maintaining quiet on the border and the prevention of terror attacks, is also to combat drug smuggling form Sinai. There have been past instances in which smuggling attempts that were thwarted became attacks when smugglers opened fire at both Egyptian and IDF soldiers.

Another senior commander praised the Egyptian efforts to fight terror in Sinai that have been intensified in the wake of the massive terror attack in October 2014 against an Egyptian base near El-Arish which cost dozens of Egyptian soldiers and officers their lives. He said that the Egyptian leadership is determined in its battle against terror and has had some successes as of late. The group that carried out the attack, and is responsible for most of the terror events in Sinai, including firing rockets at Eilat, is Ansar Bayit al-Maqdis. A few months ago the organization announced that it was pledging allegiance to, and accepting the authority of, Islamic State (ISIS). The group changed its name to The Province of Sinai of the Islamic State. The group consists of several hundred fighters who were enlisted from among the Beduin tribes in Sinai. There is no information on foreign fighters having joined the group. Despite the fact that the group is relatively small, it has caused serious losses to the Egyptian army. In the past year some 350 Egyptian soldiers, officers, police officers and intelligence personnel have been killed in the fight against the group.

The main difficulty in fighting this terrorist group stems from the fact that in Israel and Egypt very little is know about the group, its members or commanders and the organization is difficult to penetrate from an intelligence stand point. However, in the past year, the efforts to learn about, know and understand the group haven been intensified and improved.