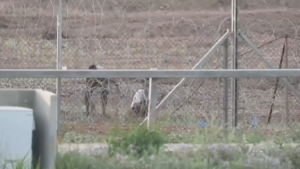 No Israelis were reported hurt in the incident, which took place near Rafah in the southern Gaza Strip, but the troops reported hearing shots fired in their direction, the IDF said.

“The terrorists crossed the security fence equipped with cutters and combustible materials before attempting to light an unmanned snipers’ post,” a military statement said.

“Troops spotted the infiltration, monitored the incident and pursued the terrorists while firing toward them. One terrorist was killed and another was evacuated for medical treatment.”

The statement said the third member of the group was captured and taken into custody for questioning, while the fourth fled back to the Gaza Strip.

The army says it acted “swiftly to prevent the threat to Israeli sovereignty and the attempt to damage security infrastructure.”

Meanwhile, Gaza’s health ministry said a 16-year-old Palestinian was wounded by IDF gunfire during the ongoing violence in the southern Gaza Strip. It was unclear whether the two incidents were related.

Tens of thousands of Gazans have taken part in violent protests, organized by Hamas, that were launched on March 30 at the border with Israel. The number has dropped significantly in recent weeks and only a few thousand have participated in the most recent demonstrations.