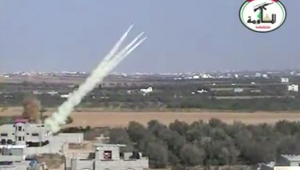 Rocket fire from Gaza had been on the rise following US President Donald Trump’s decision to formally recognize Jerusalem as Israel’s capital, although the last two weeks had seen quiet return to the area.

During the increased tensions, Israel repeatedly responded to days of rocket fire, striking 40 Hamas targets in the Gaza Strip over a two-week period.

“It is up to Gaza to decide whether there will be a state of calm in Gaza. We will not allow or tolerate an escalation from Hamas or from any other terrorist element. We will use all means to defend Israel’s sovereignty and security,” Netanyahu said.

The rockets fired on Friday interrupted a ceremony in Kfar Aza that marked the 24th birthday of Oron Shaul, an IDF soldier who was killed during Operation Protective Edge in Gaza in 2014 and whose body is still being held by Hamas.

“The rocket fire in the middle of the ceremony testifies to the lack of Israeli deterrence,” said Gabbay. “They know there’s a ceremony and so they shoot. It’s insufferable. I hope our government will respond as necessary.”

Kara wrote on Twitter: “Thank God that everyone is fine and thank you to all those for asking how we are doing. Shabbat Shalom to the people of Israel and to the security forces, whoever and wherever they are.”