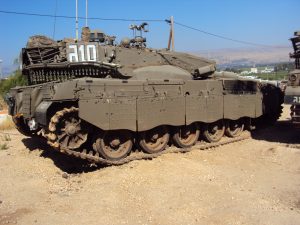 Although, no one was hurt when Palestinian militants opened fire at Israeli soldiers securing civilian engineering work along the Gaza border fence, IDF responded to the unprovoked attack.

An IDF tank shelled and destroyed a Hamas military post in the Gaza Strip on Monday in response to gunfire opened at Israelis soldiers earlier.

The soldiers were securing civilian engineering work near the Gaza border fence in the southern part of the strip when they came under fire by Palestinian militants.

None of the soldiers were hurt and no damage was caused.

According to Palestinian sources, the IDF fired three tank shells at a post east of Bureij. So far, there have been no reports of injuries.