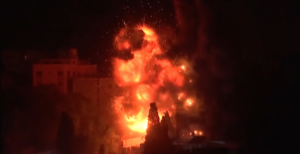 Earlier in the day, red alert sirens went off in a Gaza border community in Israel’s south, with the IDF saying that the alert had not been triggered by incoming projectiles.

Some of the initial reports on social media suggested it might have been triggered instead by an explosion of an IED attached to a batch of balloons that landed in the area earlier.

Balloon bomb attacks have been reported across Israel’s south for the last few days, with tensions rising amid the grand reveal of US President Donald Trump’s Middle East plan.

Earlier tonight, a rocket & explosive balloons were launched from #Gaza into #Israel.

In one of the cases, the IED was planted on a soccer ball in an apparent hope for casualties among children.

Incendiary and explosive devices delivered by balloon batches or kites have now long been one of the staple weapons for the Gaza terror groups.

They can take a toll on the crops if landing — and causing a fire — in farmlands or lead to innocents dying if found by children.