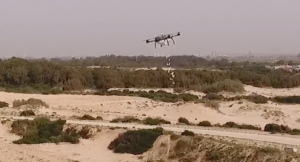 Israel’s Defense Ministry’s weapons R&D on Wednesday revealed a new development that will help IDF soldiers disperse rioters with non-violent means. Dubbed the “Shoko Drone,” the new device hovers over groups of rioters and dumps its payload of plastic baggies packed with “skunk water,” which erupt on contact, sharply reducing quality of life wherever they hit, but no one is hurt beyond being seized by nausea.

The baggies received their name from their similarity in shape and texture to a popular Israeli chocolate milk drink, sold in plastic baggies. It’s bathroom humor, admittedly, but it helps reduce real casualties.

The R&D engineers began to work on a non-violent response to disturbances at the end of last Passover. This week, the Shoko Drone began his military service above the Gaza Strip, where its activities have been rated as successful and very effective.

With the new invention, IDF forces are not required to reach a point close to the border – the operations are carried out from the air, controlled by command forces on the ground deep inside Israel.

The new development is based on a drone which is already manufactured by the Israeli defense industry. The drone is designed to carry heavy cargo and is suitable for a variety of uses as well as for low-altitude flying with designated charges. The ability to disperse rioters was not among its planned uses, but when the need arose, the aircraft’s designation was modified in a short time.

The drone was fitted with a shell capable of containing a large quantity of skunk bags, a.k.a. Shoko. The drone has the ability to release the bags on demand from the air to the ground. The bags burst, and the foul content disperses the rioters.

The Defense Ministry stresses that the skink water has been tested and is not harmful even in cases of a direct hit.