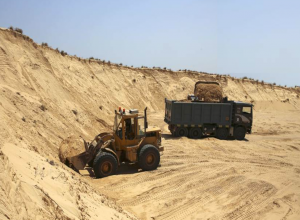 With 40 construction teams all working on the 37-mile barrier, the building of underground and underwater sections are progressing quickly and “will be built with or without another fight with Hamas,” says GOC Southern Command Maj. Gen. Eyal Zamir.

“We are taking action and will not be complacent toward the threat [from Gaza]. We have a solution,” IDF GOC Southern Command Maj. Gen. Eyal Zamir said in a press briefing Wednesday on the underground concrete wall Israel is building around the Gaza Strip to combat the threat posed by Hamas’ grid of terror tunnels.

“All the legitimacy, all the justification, ethical and moral, is with us. Now the dilemma is with the other side. Hamas will have to reassess the situation; the ball is in its court. From our perspective, building this wall around Gaza can lead to a dangerous escalation. This wall will be built, with or without another fight with Hamas,” Zamir said.

The belief within Southern Command is that the wall being built around Gaza could prod Hamas to alter its policy from the past three years and initiate hostilities with Israel. Amid this concern, Zamir delivered an unveiled message to Hamas and emphasized that the IDF is prepared and deployed for a clash with the Gaza-based terrorist group.

The 60-kilometer (37-mile) barrier, which will be built entirely in Israeli territory some 250 meters (820 feet) from the Gaza border, has an underground section made from European bentonite. At 80 centimeters (31 inches) wide, the barrier has a system of advanced sensor and monitoring devices to detect tunnels, while above ground there will be a fence 6 meters (around 20 feet) high, similar to the one which runs along the Israeli-Egyptian border.

The expected cost of construction is over NIS 3 billion ($830 million) and should be completed within two years. In recent days the project has picked up steam, with construction teams working in around 10 different locations along the border, mainly in the northern sector and sections adjacent to Israeli communities.

As early as November, some 40 teams will be working simultaneously, with the goal of finishing the barrier within two years.

The IDF says the barrier will change the reality on the ground for both Israel and Hamas, and is confident that no tunnel will be able to cross it. The underground sensors will alert the military to any attempt to breach the barrier and the IDF has developed procedures to respond in cases where an alert is received.

Where the above-ground fence meets the Mediterranean Sea in the northern sector, the IDF plans to build an underwater barrier, much a like a breakwater. A fence with sensors will be built above the breakwater to detect infiltration attempts. Six cement factories are currently being built around the Gaza Strip to facilitate the project, meant to reduce the cost of having the cement delivered.

The IDF said it has run multiple field tests recently and that “red teams” have been trying repeatedly to find holes in the system. With that, the stringent approach within the IDF stipulates that any barrier can be breached, and has prepared accordingly for those cases as well.

Patrol roads will also be built on both sides of the fence. Both roads, as stated will be inside Israeli territory. The existing security fence along the border will remain in place unaltered.

‘Hamas is deterred and restrained’

The assessment within the IDF is that Hamas is deterred, restrained, uninterested in a conflict with Israel, and is doing what it can to avoid an escalation. As evidence, only a handful of rockets have been fired at Israel in recent months by rogue elements inside the enclave.

While the IDF is normally quick to pin the blame on Hamas as the sovereign power in Gaza and responds by attacking its targets, the organization is in actuality working against those recalcitrant elements by carrying our raids against them after every rocket fired.

“There is deterrence,” Zamir told reporters. “Hamas at the moment is doing all it can to avoid an escalation, but continues to work toward building it fighting force and getting stronger. With that, the situational assessment can change at a moment’s notice, for a thousand different reasons. The Southern Command is working to maintain the calm, bolster deterrence and to give ourselves the time needed to build our capabilities.”

Alongside his warnings to Hamas, Zamir said the terrorist organization was hiding behind the civilian population.

“Southern Command’s primary effort is to improve its battle readiness for another campaign, in the understanding that this sector is combustible,” he said. “Our biggest challenge is urban areas, the underground arena and the civilian population. We are preparing and training the forces for this.”

As part of the IDF’s groundwork for a possible conflict in Gaza, the Southern Command on Wednesday also exposed Hamas’ activity among the civilian population, revealing the location of two Hamas tunnel sites buried underneath an apartment building and a family home in the northern Gaza Strip.

One of the buildings is located next to a gas station; the second is across the street from a cemetery.

“The main message is that we have intelligence,” Zamir said. “Underground infrastructure will be attacked with various methods; we will decide how to attack. These sites are legitimate military targets. Anyone inside of one, should another conflict begin, endangers himself and endangers his family, and the responsibility is on the Hamas organization.”

Zamir warned: “We intend to turn Hamas’ underground infrastructures into a death trap. These goals are legitimate from a military standpoint. If Hamas thinks it will receive immunity in a civilian environment, it is mistaken.”

As part of the operation, which took place in the early hours of Thursday, security forces also razed the home of terrorist Malek Hamed from the Ramallah-adjacent village of Silwad, who carried out the ramming attack in April that killed IDF soldier Elhai Taharlev.