In a first of its kind event, a woman who was declared clinically dead after suffering an amniotic embolism during a c-section has woken up. Immediately after removing the infant, the mother experienced cardiac arrest as the clot entered her lungs.

An amniotic embolism occurs when amniotic fluid (which contains elements foreign to the mother’s blood) enters the mother’s blood vessels. The mother’s body then experiences an extreme allergic reaction as a result of the leak, which usually involves severe respiratory difficulties, skin discoloration, lung and heart collapse, diffuse bleeding and comas.

There is no way to predict or prevent amniotic embolisms. Most cases end in the death of the mother and embryo. Embolism survivors may suffer permanent neurological damage.

“This is one of the first reports in the world and in Israel of a woman surviving an amniotic embolism thanks to the ECMO machine and the surgery,” Professor Dan Arvut said. “I hope that this breakthrough will save the lives of more mothers in Israel.”

Fighting for her life

A team of anesthesiologists, gynecologists, and cardiologists conducted CPR, with a leading Cardiothoracic surgical team fighting for her life, and hooking her up to an ECMO machine- a machine which supports the heart and lungs, allowing them to heal. 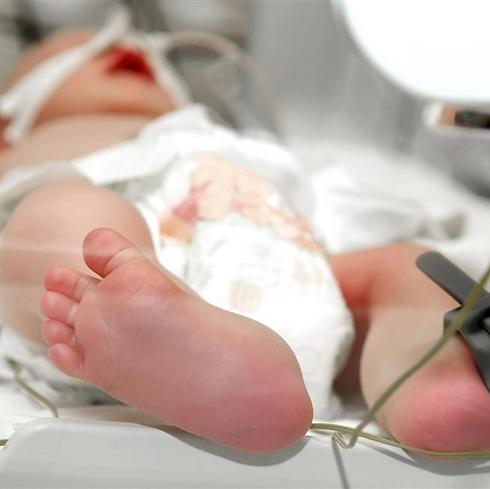 Arvut, chief of cardiothoracic surgery, and his team conducted a risky operation on the mother, during which they removed the massive clot which had blocked her lungs. The operation allowed for renewed blood flow between the heart and lungs.

The mother’s condition began improving last week. She woke up, was able to breath on her own for the first time and sat up in a chair while reacting to her environment.

The mother was shown a video and pictures of the daughter she has yet to see for the first time last weekend, with her emotional reaction leading both family and staff in her intensive care room to tear up.

Pathological examinations of the clot confirmed the initial diagnoses, as amniotic fluid was found in the clot.

“Two women die every year in Israel from amniotic embolisms,” Chief of the women’s hospital Prof. Arnon Wiznitzer explained. “The complication posed by the embolism threatened the mother’s life. We are proud that we could save her life.”