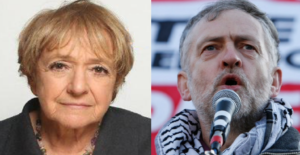 Hodge, a former British minister, confronted Corbyn in the House of Representatives after a vote on Brexit. The exchange between the two took place near the Speaker of the House of Commons and outside cameras’ view.

According to a fellow MP, Hodge told Corbyn: “You’re a f***ing anti-Semite and a racist, you have proved you don’t want people like me in the party.”

A witness of the exchange said that Corbyn replied: “I’m sorry you feel like that.”

In addition, a Labour Party source said that Hodge “was aggressive, Jeremy was calm. Other MPs who were there were upset by it.”

Corbyn is expected to invite Hodge to discuss the issue calmly in a meeting, Hodge is also likely to be asked to appear before a Labour disciplinary panel.

Jeremy Corbyn seen here leading a pro-Gaza/Hamas demonstration in the summer of 2014 also attended a ceremony at the grave of a terrorist behind the Munich Olympics massacre. – Photo: Social Media screenshot

Hodge is considered a tough critic of Corbyn. She led a vote of no confidence against him in 2016 and has repeatedly criticized Corbyn’s position on anti-Semitism. Once, she even referred to Corbyn as “the face of anti-Semitism.”

Instead of accepting the full definition of anti-Semitism drawn up by the IHRA, a definition widely supported by party members, the Labour Party updated its Values document and now states that “anti-Semitism is racism” and “unacceptable.”

Ephraim Mirvis, Chief Rabbi of the United Hebrew Congregations of the Commonwealth, said that the party’s failure to adopt the IHRA definition of anti-Semitism sends “unprecedented message of contempt” for the British Jewish community.

Labour MP Ian Austin called the party’s move “utterly shameful,” and added: “I am ashamed to be a member of the Labour Party.”

Tom Watson, deputy leader of the Labour Party, said: “Are we serious about winning a General Election? Are we serious about dealing with anti-Semitism? We need to grip this issue and close it down. The people who will judge us on this are the Jewish community and rightly so.”