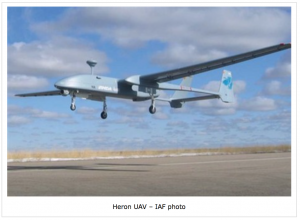 The Indian Air Force already operates a fleet of Heron, Harpy and Searcher unmanned aerial vehicles (UAV), which are used for taking out enemy radar positions as well as surveillance and intelligence gathering.

The Heron drone, which was developed by Israel Aerospace Industries, is capable for flying for 52 hours of continuous flight at medium altitude levels.

The drone is used in operations by the United States, Israel, Germany and South Korea, among others.