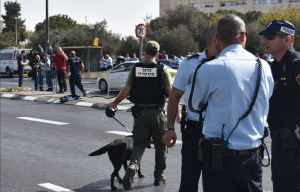 The IDF employs dogs to fill several tasks including bomb sniffing, attack and guarding duties and search and rescue missions.