In an interview with King Abdullah II of Jordan, he says discussions with the Israeli PM ‘have really improved’ but says he fears it may be too late for a 2-state solution.

WASHINGTON – Relations between Jordan’s King Abdullah and Prime Minister Benjamin Netanyahu have tightened and are “very strong,” the monarch said on Monday. In an interview with The Atlantic’s Jeffrey Goldberg, King Abdullah II said, “Our discussions have really improved.” According to reports, the two met late last month. 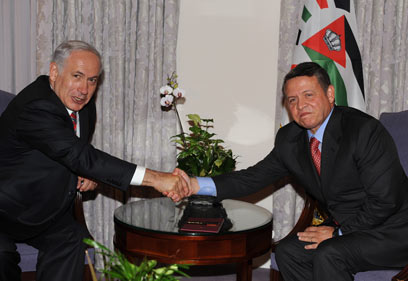 At around late December it was reported that Netanyahu had secretly traveled to Amman to discuss the Syrian civil war with the king. Their last meeting, According to AFP, had revolved around the subject of the Mideast peace process.

In his speech at the swearing in ceremony of his new government, Netanyahu said Monday, “We are committed to the peace treaties with Egypt and Jordan, they are the foundations of stability in the Middle East and must be preserved. That is our policy, it must also be our neighbors’ policy and I believe it will be the case in the coming years.”

In his interview, King Abdullah weighed in on the chances of a two-state solution but appeared far from optimistic. “It could be too late already for the two-state solution,” he said. “I don’t know. Part of me is worried that is already past us.

Asked what such a scenario could entail, he responded: “Isratine” referring to a neologism popularized by the Muammar Gaddafi to describe his vision of a joint Arab-Jewish state.” If Israel doesn’t agree to a Palestinian state quickly, Abdullah said, “apartheid or democracy” will be its choice.

“The practical question is, can Israel exert permanent control over Palestinians who are disenfranchised ad infinitum, or does it eventually become a South Africa, which couldn’t survive as a pariah state?” he said. “The only way you’re going to have a Jewish part is if you have a two-state solution. That’s the Jewish part,” he added.

Asked whether he believed US President Barack Obama wants to work on the peace process, he replied: “That’s the million-dollar question” noting that Secretary of State John Kerry clearly does. The king noted that the fact that Obama is in his second term makes him more eligible to overseeing an effective peace process. “This is the last moment,” he said. “Can it be achieved in four years? Are we too late? After four years, it’s over.”

Abdullah also discussed the leaders of Turkey and Egypt, Recep Tayyip Erdogan and Mohammed Morsi, and harshly criticized them. According to him, the two are using democracy to impose the Muslim Brotherhood’s rule. “Erdogan once said that democracy for him is a bus ride,” Abdullah said. “‘Once I get to my stop, I’m getting off.’”

He was even less impressed with Morsi. “There is no depth there. I was trying to explain to him how to deal with Hamas , how to get the peace process moving, and he was like, ‘The Israelis will not move.’ I said, ‘Listen, whether the Israelis move or don’t move, it’s how we get Fatah and Hamas together. There’s no depth to the guy.”

The Jordanian king also mentioned Syrian President Bashar Assad and revealed, “I had offered a couple of times to get his wife out and they said, ‘Thank you very much, but why don’t you worry about your country more than you worry about us?’”