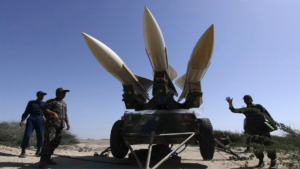 “The US military forces’ deployment in the Persian Gulf is more of the nature of psychological warfare. They are not ready for a war, specially when Israel is within our range,” the Iranian Parliament vice-speaker Ali Motahhari said on Sunday, according to the FARS news agency.

Last week, Washington deployed new Patriot missiles to the Middle East and sent the USS Abraham Lincoln Carrier Strike Group and a bomber task force to the US Central Command region in the Gulf after reportedly receiving intelligence from Israel of an unspecified attack plan.

The head of Iran’s Iran’s Revolutionary Guard similarly dismissed the buildup as “nothing but psychological warfare”, saying that “ the US lacks power and does not dare to start a war against Iran.”

Meanwhile, a senior Israeli official warned that Israel could indeed be caught in the crossfire of a US-Iran conflict either by direct rocket attack or through one of Iran’s proxies, such as Hezbollah in Lebanon or Islamic Jihad and Hamas in Gaza.

“Things are heating up. I wouldn’t rule anything out. Iran may fire rockets at Israel,” Israel’s Energy Minister Yuval Steinitz told the Ynet news site.

Tensions between US and Iran have flared since Tehran announced it was rolling back its commitments to a 2015 nuclear deal rejected by the US and threatened to step up its uranium enrichment if the remaining signatories did not uphold their part of the agreement.