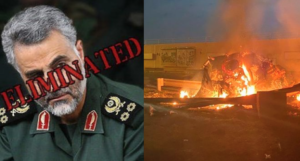 Following Soleimani’s death, Trump tweeted an image of the US flag without any further explanation.

The pre-dawn developments mark the most major escalation yet in a feared proxy war between Iran and the US on Iraqi soil.

Just a few hours later, Iranian state television carried a statement by the Revolutionary Guard Corps saying Soleimani “was martyred in an attack by America on Baghdad airport this morning.”

The Hashed confirmed that both Soleimani and its deputy chief Abu Mahdi al-Muhandis were killed in what it said was a “US strike.”

“The deputy head of the Hashed, Abu Mahdi al-Muhandis, and head of the Quds Force, Qasem Soleimani, were killed in a US strike that targeted their car on the Baghdad International Airport road,” it said.

The Hashed is a network of mostly-Shiite armed units, many of whom have close ties to Tehran but which have been officially incorporated into Iraq’s state security forces.

The units joined forces to fight the Islamic State group in 2014, after many of them built up years of fighting experience during Iraq’s war years, including against the US.