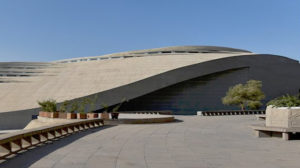 Conservative Muslims, unable to accept the modern mosque design in Tehran, blame the Jews for the building lacking the traditional domes and minarets, accusing authorities of “treason” for approving the design.

The Jewish people were surprised to find themselves entangled in a heated debate over mosque design in Iran.

A massive new mosque being constructed in Tehran sports a sleek, minimalist design that architects say evokes the “austerity of early Islam.”

But more conservative Muslim voices have slammed the departure from the more traditional domes and minarets characteristic of mosques across the Middle East.

Fluid Motion Architects’ Vali-E-Asr mosque in Tehran stirs controversy as it has no minaret or dome: https://t.co/bQcAskj2xj #tehran pic.twitter.com/6GK4o90F2E

Some called it the result of “secular and Jewish influence.”

The New Arab reported that one local news website, Mashregh, went so far as to state that the new mosque looks like a ‘Jewish yarmulke’ (kippa in Hebrew, skullcap in English), and that the architects should be tried for “treason” for aiding a Zionist conspiracy.

Next time someone tells you that Iran has no problem with the Jews in general, and is only opposed to Israeli government policies, remember this story.