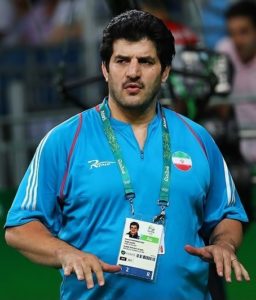 Just recently, Iranian wrestler Alireza Karimi received a six month suspension for losing on purpose to a Russian opponent during the U-23 World Championship held in Poland in November, so that he would not advance to the next round and face Israeli wrestler Yuri Kalashnikov, who won a bronze medal. Karimi’s coach, who ordered him to lose the match, was banned for two years.

Watch the Iranian lose on purpose to avoid Israeli opponent:

“If we must continue with the policy of non-competition against the Zionist regime’s athletes,” Khadem said, “the responsibility cannot fall on the shoulders of the coach and the athlete. Forcing an athlete to accept defeat or run around all night looking for a doctor’s note is not right.”

The Federation’s website announced his resignation, quoting Khadem as saying: “I cannot lie. Sometimes the best way to take a stand is not to stand.”