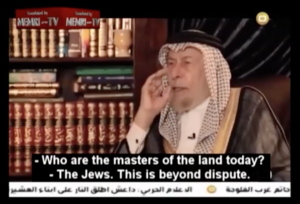 In a TV interview translated by MEMRI, Sunni cleric Sheikh Ahmad Al-Kubeisi said Netanyahu “holds the remote control” and “gives orders to all the rulers of America, Europe, and elsewhere.”

A prominent Iraqi cleric has accused Prime Minister Benjamin Netanyahu of being the driving force behind the Islamic State (ISIS) terror group.

In a recent TV interview translated by MEMRI, Sunni cleric Sheikh Ahmad Al-Kubeisi said that ISIS was an asset in the hands of Netanyahu, who “holds the remote control” and “gives orders to all the rulers of America, Europe, and elsewhere.”

He also said that the Jews are the masters of the land today and that none of the ISIS fighters “are even circumcised.”

Al-Kubeisi further said that his fatwa ruling that people killed fighting ISIS were martyrs did not apply to the mostly-Shi’ite militia Popular Mobilization Units, because they “are killing Muslims just because they are Sunnis,” and compared them to Jews.

Asked about ISIS leader Abu Bakr Al-Baghdadi, he said that he was “so stupid that when he was detained in Camp Bucca… they used him as a scarecrow and then chucked him into the garbage.”

The interview aired on the Iraqi Sumaria TV channel on June 11, 2016.