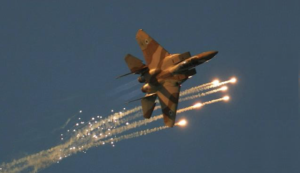 The deal with aircraft manufacturer Boeing, worth a combined $11 billion, is likely to include three main components: A fleet of fighter jets, a fleet of transport helicopters and aerial refueling tankers.

Similar to previous aircraft procurement deals in recent decades, Israel will use American defense aid to pay for the fleets. The deal is expected to be spread out over the course of approximately 10 years, starting from the moment the deal is signed and until the last of the aircraft is delivered to Israel.

The Defense Ministry and the IDF have been working to complete this deal for quite some time. The main point of debate surrounded the question of whether to purchase each component from a different manufacturer or all three from the same company – which ultimately came with better payment, supply and maintenance conditions.

Regarding two of the components, Boeing had the clear advantage from the outset. Its refueling tanker, developed from the Boeing 767 passenger plane, has well-established capabilities and could be delivered in a relatively short time.

Boeing’s helicopter menu was also advantageous. Israeli officials, however, didn’t want to buy just one type of helicopter, rather an entire transport squadron with a mix of CH-47 Chinooks and V-22 Ospreys. It has yet to be determined how many of each will be purchased, but the decision will depend on the air force’s recommendations. The air force is expected to gradually phase out its existing fleet of CH-53 Sikorsky transport helicopters.

The primary dilemma surrounding the deal involved the fighter jets. Israel’s most recent deal with Boeing was 20 years ago, when it purchased a squadron of F-15i Thunder jets. Subsequent deals were made with Boeing’s competitor, Lockheed Martin, first for the purchase of over 100 F-16i Storm jets and in recent years 50 F-35 Mighty jets – Israel’s first plane with stealth capabilities.

Until recently, IDF officials believed the F-35 would be the last manned fighter plane Israel would buy, both to preserve the air force’s qualitative edge over other countries in the region and to minimize the types of planes it would have to operate – thereby cutting down on operational expenditures. However, there has been a policy shift and now the plan is to buy another squadron of advanced F-15s, as part of the overall deal with Boeing.

The jet, developed from the original F-15,  will be completely new and be known as the IA F-15 (an acronym for Israel Advanced).

Boeing committed to installing improved features, including certain stealth capabilities. With that, for the purpose of maintaining relations with Lockheed Martin and the F-35 project, it’s possible that a limited number of additional F-35 will also be bought and delivered over the course of several years.

Officially, the deal is currently waiting on theIAF’s professional recommendation, which will be presented to the chief of staff, the director general of the defense ministry and finally to the defense minister, who will jointly formulate the defense establishment’s position on the matter. The deal will then be brought before the cabinet for final approval.

Senior defense officials, meanwhile, have intimated that the Boeing deal enjoys consensus support inside the Defense Ministry and IDF, and that the cabinet is likely to approve it.

The decision is expected to be made by the end of 2018. With that, defense deals of this scope always come with efforts by powerful lobbies in Washington and Jerusalem to influence the decision, and it’s anticipated that this time will not be any different.