Israel among first to dispatch humanitarian aid to Sierra Leone 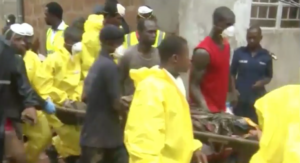 Israel on Tuesday sent humanitarian aid to the West African country of Sierra Leone after a deadly mudslide struck areas outside the capital, Freetown.

Authorities said more than 400 people were killed in and around Freetown on Monday after heavy rains triggered a massive mudslide. The Red Cross estimated that 600 people were still missing, and said the death toll was certain to rise. By early Wednesday, 297 bodies had been recovered: 109 men, 83 women and 105 children, the Red Cross said.

Sierra Leone President Ernest Bai Koroma said the country was in a “state of grief” over the overwhelming devastation and appealed for international assistance, saying his country needed “urgent support now” for the thousands of people affected by the disaster.

“Following the mudslide in Sierra Leone, and in accordance with instructions by Prime Minister Benjamin Netanyahu to extend assistance immediately and in every way possible, the Foreign Ministry, by means of the Africa Division, Israel’s Agency for International Development Cooperation and the Israeli Embassy in Senegal, which is accredited to Sierra Leone, has begun to examine means of providing assistance to victims of the natural disaster in the country,” the Israeli Foreign Ministry said in a statement issued Tuesday.

“The assistance will be provided by the Israeli Embassy in Senegal in accordance with immediate needs on the ground — clean water, medicines, blankets, etc. Israeli Ambassador to Senegal Paul Hirschson is in touch with senior officials from the Sierra Leone government to coordinate the transfer of Israeli humanitarian aid to the country following the devastating mudslide.”

The Red Cross estimated Tuesday that some 9,000 people have been affected by the mudslide.

The U.N. said it was providing emergency response assistance, and contingency plans were being put in place to try to stem the outbreak of diseases such as cholera.