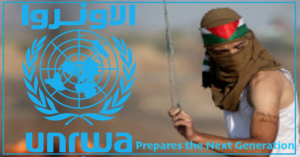 “We’re not talking, we’re acting,” King wrote on Facebook. “While the previous mayor, Nir Barkat, published press releases for years about his plans to reduce UNWRA’s influence and involvement in eastern Jerusalem, the current mayor, Moshe Lion, passed last night a decision of unprecedented importance. I salute you, Mayor.”

Previously, it was revealed that UNRWA, which has clear terror ties, has been responsible since 1965 for 20,000 “refugees” who have full Israeli citizenship and receive National Health Insurance payments, free health care, and other services provided to Israeli citizens. They also receive services from the Jerusalem municipality, since they are residents of the city.

Official school logos to six different UNRWA financed schools that include the UN logos along with map of Israel replaced by Palestine. – Photos: ElderOfZiyon.blogspot.

As part of its activities in Jerusalem, UNRWA operates several clinics, as well as schools – which use textbooks that do not mention Israel even once. All of their schools and clinics operated without Israeli licenses.