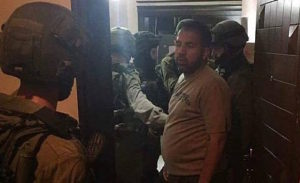 In a joint IDF-Shin Bet operation in the Ephraim Regional Brigade, forces detained five Hamas terrorist operatives in Qalqilya who are suspected in promoting Hamas terror activities in recent months.

The IDF also conducted a large-scale brigade operation against Hamas’ student organization, which incites terrorism in Hevron’s university. As part of the operation, soldiers confiscated materials that incited to violence and warned members against getting involved in terrorism.

IDF forces from the Binyamin Regional Brigade and the Ephraim Regional Brigade, together with the Shin Bet security service, arrested four Palestinians suspected of incitement relating to their role in operating the Al Quds television channel, which is defined as a terrorist organization. Troops also confiscated broadcasting equipment and vehicles belonging to the station.

According to the IDF, Al-Quds TV operates on behalf of Hamas and serves as its propaganda arm, and was declared a terrorist organization in September 2017. All of the suspects were transferred to the security forces for interrogation.

During the operation, violent riots broke out in three locations towards the forces. The soldiers with non-lethal riot dispersal.