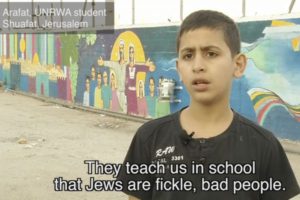 Former-Jerusalem Mayor Nir Barkat had been advocating for the closure of the Hamas endorsed UNRWA schools for years, arguing that all the schools in metropolitan Jerusalem should be overseen by the Israel Ministry of Education.

The Israeli government has decided to shut down schools operated by the UN Relief and Works Agency (UNRWA) in Arab neighborhoods of Jerusalem.

While there are numerous refugee populations in the world, the only one enjoying the support of its own dedicated UN agency (UNRWA) is the so-called Palestinian “refugee” population (though it is debatable whether or not they can even be called genuine refugees).

At any rate, with their own heavily-financed UN agency, you’d think the Palestinian refugees would be sitting pretty, and that such investment would result in the quick resolution of the situation.

But you’d be wrong.

One of the main ways that UNRWA has ostensibly tried to help the Palestinian Arabs is by operating schools in local Arab towns and neighborhoods. Sadly, those schools were long ago hijacked by extremist elements in the Palestinian Authority, and today teach children to perpetuate the conflict with Israel, rather than to seek peace and coexistence. This abuse has resulted in Western nations yanking funding from the agency, in particular the United States, which recently cut off $300 million in annual funding for UNRWA over its complicity in anti-Israel incitement.

Evidence of just how bad the UNRWA school curriculum has become can be seen in the fact that Hamas permits these schools to operate in the Gaza Strip.

Israel will no longer play that game, and the UNRWA schools on the eastern side of Jerusalem will be shuttered, according to a Channel 12 report on Sunday.

Former-Jerusalem Mayor Nir Barkat had been advocating such a move for years, arguing that schools in Arab neighborhoods should be overseen by the Israel Ministry of Education and the Jerusalem Municipality, just like all other schools in the capital.