The tripartite alliance between Cyprus, Greece and Israel in natural gas partnerships, defense agreements and economic cooperation, could serve as a basis for an ever wider regional front.

THE PAST several weeks have seen a flurry of diplomatic activity reinforcing the tripartite alliance between Israel, Greece and Cyprus.

On January 28, the three leaders, Cypriot President Nicos Anastasiades, Greek Prime Minister Alexis Tsipras and Prime Minister Benjamin Netanyahu held a summit meeting in Nicosia; the day before Tsipras brought 10 of his cabinet colleagues to Jerusalem for a government to government session with their Israeli counterparts; and the day before that Defense Minister Moshe Ya’alon held security talks in Athens and a month later in Cyprus. 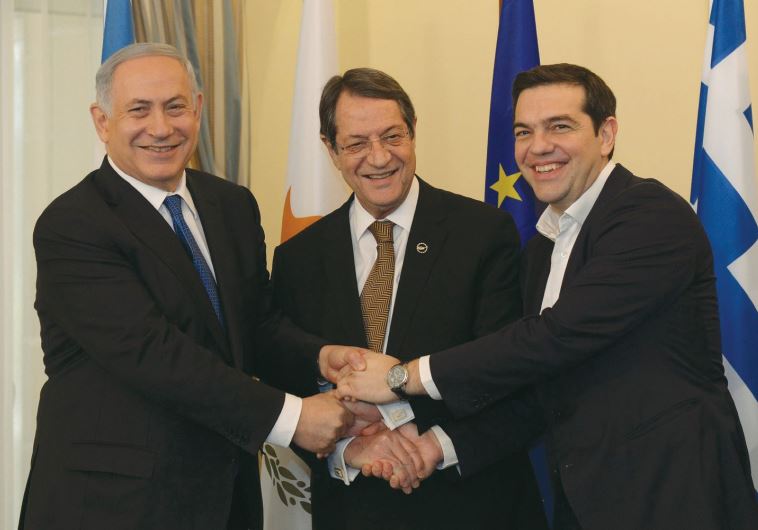 The three countries share obvious economic interests in what they call the “energy triangle” in the Eastern Mediterranean, where both Israel and Cyprus have discovered huge natural gas deposits.

One of the more ambitious joint projects is to build an undersea gas pipeline from Israel to Cyprus to Crete to mainland Greece to facilitate gas exports to Europe; in parallel there are plans for a 2000 megawatt undersea electricity cable, the “EuroAsia Interconnector,” which would follow much the same route, linking the Israeli electricity grid to those of Cyprus, Greece and mainland Europe, thereby providing Israel’s currently isolated power system with strategic backup.

There are common military interests too: primarily defending the “energy triangle,” but also joint military exercises and additional training space for the Israel Air Force after the loss of Turkish skies in 2010.

The close ties are based on a confluence of strategic interests in a turbulent war-torn region. All three have a common interest in keeping the chaotic Syria situation from spilling over into their domain; in other words, keeping Islamic State (ISIS) and the newly dominant Russia-Iran-Hezbollah axis at bay. All three recognize the need for new local alliances given the decline of American influence in the region.

Their tripartite partnership is also a counterweight to Turkey’s hegemonic regional ambitions.

But at the same time, all three declare willingness to widen the alliance to include other key players like Egypt and Italy and, in certain circumstances, perhaps even Turkey itself. The goal would be a wide moderate front made up of non-Arab Eastern Mediterranean/Middle Eastern countries and moderate Sunni states, backed by the US, despite its perceived regional pullback.

The Israel, Greece, Cyprus alliance, therefore, has solid foundations and could form the basis for something bigger. But, in itself, it is hardly a substitute for relations with more powerful players.

The joint economic interests, however, are of potentially major significance. In August 2013, the three countries signed a tripartite energy memorandum providing for the laying of the EuroAsia Interconnector, set to be the longest undersea electricity cable in the world. It will run from Hadera in Israel 329 kilometers to Vasilikos in Cyprus, 879 kilometers from Cyprus to Crete and 310 kilometers from Crete to mainland Greece, a total of 1,518 kilometers or 950 miles. From Greece the cable will fork northwest to Italy and Switzerland and northeast to Serbia and Bulgaria.

The project, which will cost an estimated 1.5 billion euros, has EU backing as part of its Connecting Europe Facility (CEF) program. The work will be carried out by a Cypriot-led consortium including Cyprus’s DEH-Quantum Energy Group and Greece’s state-controlled Public Power Corporation, with the target date for the Israel-Cyprus leg, 2019, and completion of the project as a whole set for 2022. Electricity will flow in both directions, enabling significant energy savings. Importantly for war-threatened Israel: it will provide the local electricity grid with crucial backup if its own production facilities are damaged.

LESS PLAUSIBLE is the mooted undersea gas pipeline from Israel through Cyprus and Greece to mainland Europe. Although Netanyahu still holds by it, the consensus among the experts is that the Cyprus to Greece leg is unfeasible, both because of the distances involved and the depth of the adjoining waters. More economically viable would be pipelines from Israel to Cyprus and from there to Egypt to make up the shortfall in Egyptian gas needs until its own newly discovered fields start producing and to Turkey for exports to Ankara and mainland Europe.

Of course, Israel could theoretically build direct undersea pipelines to Egypt and Turkey; involving Cyprus, however, has economic and political advantages. Cyprus and Greece have forged a tripartite alliance with Egypt, similar to the one they have with Israel. This, they insist, will make it easier to work out gas and even wider strategic deals involving both Israel and Egypt.

Turkey, given its inherent historic hostility toward Cyprus and Greece, and its fractured ties with Israel, is a more complex proposition. The Israeli hope is that Turkey’s need for gas alternatives to Russia and, paradoxically, the pressure of the close ties between Israel, Greece and Cyprus may attract the Turks to new projects that seem impossible today.

Indeed, it was the rupture of the close ties between Israel and Turkey in the wake of the Mavi Marmara incident in May 2010 (in which Israeli commandos stormed a Turkish-operated vessel threatening to run the naval blockade of Gaza) that spurred Israel’s burgeoning military cooperation with Greece and Cyprus. In July, less than two months after the incident, then Greek prime minister George Papandreou flew to Israel to discuss alternative military cooperation. In August, Netanyahu became the first Israeli prime minister to visit Athens. And by October, the Israeli and Greek air forces were conducting joint exercises in Greece.

A year later the IAF hosted Greece’s Hellenic Air Force at the Ovda base in the Negev, carrying out simulated dogfights and ground attacks as well as mid-air refueling.

Similar exercises took place the following year over the Peloponnese. In November 2013, Israel significantly upgraded the joint air force training with operation “Blue Flag,” the IAFs biggest ever air maneuver, including seven Israeli squadrons and one each from the air forces of the US, Greece, Italy and Poland. The large-scale exercises, which included simulated attacks on enemy bases while avoiding anti-aircraft missiles and detection by enemy radar systems, were repeated in late October-early November 2015.

The two countries have also conducted significant joint naval exercises. In 2011 Turkey, in a calculated snipe at Jerusalem, pulled out of the annual “Reliant Mermaid” maritime maneuvers with Israel and the US. The following year Greece was invited to replace Turkey, the name of the annual exercise was changed to “Noble Dina” and the focus switched from search-and-rescue to attack-and-defend scenarios, including anti-submarine warfare and repelling attacks on offshore natural gas rigs.

Israel and Greece signed a Defense Cooperation Agreement in January 2012; Cyprus followed suit in February. The Cypriot agreement allows the IDF use of Cypriot air space and territorial waters around the island for training purposes and to protect vital energy resources.

Dubbed “Onisilos-Gideon,” the ensuing joint exercises were upgraded in 2014, with dozens of IAF fighters and support aircraft participating in training over Cyprus, simulating firing at targets on land and sea from Limassol to Paphos. The two countries have also conducted a series of joint naval exercises focusing on protection of offshore gas installations.

So far there has been only one known genuine incident testing the Israel-Cypriot alliance: In September 2011, IAF planes overflew Turkish Northern Cyprus as a warning to a Turkish seismic research ship that had entered Cypriot waters in what was seen as a deliberate provocation over Turkey’s offshore gas exploration dispute with Cyprus.

While it is clear that Israel can offer Cyprus something of a military umbrella, what, besides excellent training facilities, can the neighboring island offer Israel? Greek and Cypriot officials suggest that Cyprus should be seen by Israel as a huge strategically-placed aircraft carrier and they hint at the possibility of IDF-managed radar on the island making a major contribution to Israel’s security. All this, they argue, gives Israel an element of strategic depth it would otherwise lack.

Israel has developed its own system for defending the gas rigs in its Exclusive Economic Zone (EEZ) or territorial waters.

However, according to Israeli defense experts, a joint integrated system with Cyprus and Greece would be more effective.

Moreover, from an Israeli point of view, the alliance could serve as another bridge between Israel and the EU, a key element in its foreign relations. For example, Greece has been leading the fight in Europe against the labelling of Israeli goods produced in the West Bank.

THERE ARE other instances of bilateral solidarity. Greece provided significant help from the air in fighting the huge Carmel forest fire in December 2010. And a year later, both Greece and Cyprus refused to allow a second planned Turkish-led flotilla to Gaza to sail from their ports, effectively quashing the project.

Such dedicated fighting in Israel’s corner has not always been the case. On the contrary, during the 1970s and 1980s, Cyprus was a hotbed for Palestinian terror. In late February, in a sign of the new times, Ya’alon congratulated Cypriot security forces for foiling attempts by Iran and Hezbollah to establish a terrorist infrastructure on the island.

Yet as important as it is, the tripartite alliance does not significantly alter the regional balance of power. Indeed, it is totally overshadowed by two recent strategic developments with major implications for the region’s future: the de facto Russia-Iran alliance turning the tide in the fighting in Syria, and the hands-off American Middle East policy that made it possible.

In what has become a battle for regional supremacy in the Syrian theater, Russia exploited the vacuum created by America’s inaction to enter the fray last September with overwhelming airpower to support Iranian proxies, Hezbollah, the Iraqi Shi’ite Badr brigade and the Afghan Shi’ite Fatemiyun, Iranian Revolutionary Guards and Syrian forces loyal to President Bashar Assad on the ground. This Russian-Iranian- led combination has proved a game changer. In any future Syria settlement, Russia and Iran are likely to emerge as the power brokers behind the new order.

This enhancement of Russian and Iranian power in the region has come about largely through US President Barack Obama’s reluctance to use force or the threat of force in the conduct of international relations – preferring diplomacy as a means of resolving differences. This has allowed other more ruthless actors, like Russia and Iran, to play a virtually no-cost power game.

The big question for Israel is whether Obama’s approach is idiosyncratically his, or whether it reflects a widespread change in American strategic thinking, especially in the Middle East.

While the Israel, Greece, Cyprus tripartite alliance is not a great force multiplier, it could serve as a basis for a wider front, offsetting enhanced Russian and Iranian-Shi’ite power. This, however, will depend on two key factors: the extent to which Israel can shape an accommodation with the Palestinians and whether the next American president adopts a more assertive worldview.