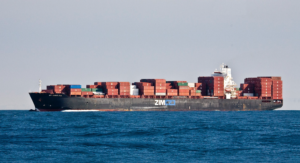 The 5.5 billion shekel ($1.7 billion) Bay Port at Haifa, which will be operated by Shanghai International Port Group, will enable larger classes of cargo ships, carrying 18,000 containers or more, to dock in Israel.

The country is selling its state-owned ports and building new private docks in an effort bring down costs and cut above-average wait times for vessels to unload. About 99% of all goods move in and out of Israel over sea and an upgrade is needed to maintain economic growth.

“I’m sure we can leverage this opportunity not just for local prosperity, but for realizing opportunities and making a real contribution to our neighbors in the Middle East,” Transport Minister Merav Michaeli said in a statement after the port was inaugurated in a low-key ceremony on Wednesday.

Another new port on the Mediterranean coast is due to open in Ashdod by the end of the year, to be operated Swiss-based Terminal Investment Limited.

Opinion: The Case for Supporting This Deal

There are many who feel this deal is dubious at best. The thought of allowing China to gain access to such a major national infrastructure is unwise and potentially harmful in the extreme.

No one trusts the Chinese. After-all, the world is aware of their intellectual property thefts, spying, their treatment of protestors in Hong Kong, Beijing’s dreams of expansion (Taiwan), mistreatment of their people and the current accusations of crimes against humanity and possibly genocide against their (Muslim) Uyghur population.

This new Chinese-built hi-tech Haifa Port Terminal will be operated by China for the next 25 years.

The deal was brokered to end decades of widespread corruption within the port by the workers and the stranglehold of Israel’s economy by unions that protected their workers from retaliation. Strikes were commonplace, happening frequently over past decades, causing huge losses in national revenues, in the tens of millions, for each day of strike.

We have been working steadily with the Chinese for over 7 years now.
Their tunnel-drilling teams have been hard at it in a number of operations: numerous highway tunnels in the North of Israel, for a new road into Jerusalem, and for the new high-speed train line between Tel Aviv and the capital.

The Chinese are also a powerful work-force in thousands of new high-rise condos throughout Israel.

Beijing is not interested in our problem with the Palestinians, our internal politics, nor do they want us involved in theirs, but they do seek economic benefits for their people and their national coffers.

China is very happy to be employing thousands of their citizens, who make more money here than they may be making back home….so, much is sent back to their families in China.

Believe me when I say Israeli businessmen & financial directors that negotiated these contracts would make Trump proud!
– They are among the best in the business. For Beijing’s investment, China was given a 25 year management contract over the Port’s operations.

The Chinese already know it will most likely be nonrenewable …if that will be our decision at the end of the 25 year contract.

Israel’s internal security bodies will always have their ‘eyes & ears wide open’… 24/7, to guarantee the security & integrity of the port, our national interests and the People of Israel. You can trust Jerusalem takes this seriously and will do what needs to be done in protecting the State of Israel.

Now, with Iran’s recent alignment with China, Jerusalem feels confident that neither Iran nor any of their proxies will seek to target the Port with missiles, as had been done in past conflicts.

After-all, damage to the port endangers the Chinese workers and future revenues to the People’s Republic of China… and THAT’S their ‘bottom line’.

We feel confident that if attacked, China will be forced to reevaluate their past UN position on Israeli retaliations, going so far as to assist us in ways that have yet to be demonstrated.

In the meantime, The port can handle ships carrying up to 18,000 containers, a service that no port in Israel has been able to provide up to now. The giant container ship Cosco Shipping Alps, carrying some 14,500 containers, reached Israel’s shores on Saturday, making history. This is the first mega vessel to visit the new Haifa Port.
– With larger vessels carrying larger loads, the new port should bring consumer prices down on most imported products.