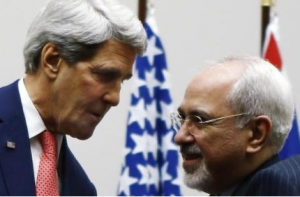 Four rockets were fired from Syrian Thursday evening, hitting areas in the northern Galilee and the Golan Heights. Fortunately no one was hurt, but “this was an indiscriminate terrorist attack, planned in advance, with no prior Israeli provocation,” the letter stated.

Israel informed the Western powers that it has “reliable information that this attack was carried out by the Palestinian Islamic Jihad, ordered directly by the Iranian terrorist Said Izadhi of the Iranian Revolutionary Guards.”

The letter further states: “This is further clear indication of Iran’s increasing involvement in attacks against Israel in particular and against regional targets in general. The ink on the nuclear agreement has not yet dried, and this attack shows clearly how Iran plans to act the moment after the international sanctions are removed.”

Israel attributes responsibility to the Western powers, led by the United States: “The international community, headed by those who signed on the deal, cannot allow Iran to attain international and political legitimacy even as it continues to act directly and actively in terrorist attacks throughout the Middle East.”

In conclusion, Israel demands that the countries that signed with Iran now intervene against Iran’s increasing belligerence.

Israel eliminated the four-man Islamic Jihad terror cell responsible for the attack on Friday morning, striking them as they were in a vehicle ten to 15 kilometers from the Syrian border.

Defense Minister Moshe Ya’alon (Likud) added details of the rocket attack last night: “Following the signing of the nuclear deal with Iran and the removal of the sanctions, what we saw here [with this attack] is liable to be a preview to a more wealthy and more murderous Iran, which will funnel much money and arms to terrorist organizations to harm Israel and Western interests. This is Iran’s intent, and the West had better not sweep this fact under the rug.”

“The attack against Israel was carried out by a terrorist cell activated, sponsored, and armed by Iran. It took place from within territory controlled by (Syrian President Bashar al-)Assad, to whom we also attribute responsibility.”

“Iran, via the Al Quds force and its emissaries in Syrian and Lebanon, is trying to open a terror front against Israel from the Syrian Golan, and is smuggling arms and training terror cells to this end. We will not tolerate attempts to violate Israel’s sovereignty or harm the security of its citizens, and we will respond firmly and strongly against all who challenge us.”