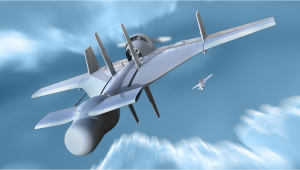 Israel Aerospace Industries unveils the Harpy NG, a missile that is designed to counter the newer types of air defense radar threats, and can stay airborne for 9hrs & destroy its targets at great distances.

Israel Aerospace Industries (IAI) unveiled in an international aviation exhibition in Singapore this week new “Roamer” class missiles that look like an unmanned aerial vehicles (UAV), but are in fact missiles that hover in the air until they lock on their targets, then collide with and destroy them.

IAI also unveiled the Rotem, a tiny drone that can roam in urban environments. The Rotem is an lightweight electric drone that can be operated by a single soldier, and has the ability to stay in the air for 30 minutes.

The drone is equipped with an electro-optical thermal camera and is vertically launched from a small launcher. The Rotem is simple to use, allowing entry through windows and nimble maneuvering around fences. 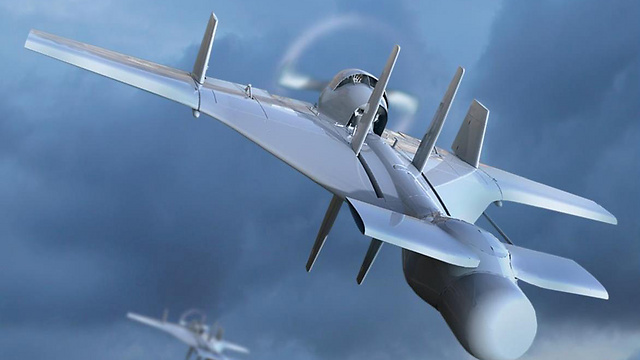 The newest model, the Harpy NG (New Generation) is designed to counter the newer types of air defense radar threats that have evolved since the introduction into service of its former version, in the early 1990s. – Photo: IAI

The name of the new model, revealed at the end of a development process that took more than two years, is the Harpy NG, and is considered the next generation of what IAI terms its “loitering attack systems”, referring to these models’ ability to loiter over a target before destroying it.

Like its predecessors, the Harpy NG is launched from a launcher placed on a truck or a boat, but its properties allow it to stay much longer in the air, and particularly to better identify enemy radars, which are the supreme target until the arrival of manned aircraft.

The new Harpy can better detect radars because of the expansion of bandwidth installed, whose frequency range was lowered. In this way, the missile is able to detect more of the enemy’s radars installations.

The air time of the new missile has been increased by 40 percent compared to the previous model, meaning it can hover  for about 9 hours, flying at an altitude of 15,000 feet at an average speed of 120 kilometers per hour. It can thus cover enormous distances. This means that if it is used by air forces, it can be used to blind the enemy’s radar systems.

The internal system of the new model has been improved and can be preprogrammed by the operator, running multiple attack scenarios in the autonomous fire-and-forget method, so if the missile recognizes that the primary target is not there, it guides itself to explode on a secondary target or crash in a predetermined area.

Like previous models of the same family, the new Harpy has a warhead carrying 15 kilograms of explosives and its total weight reaches 160 kilograms per missile. It will be possible to lauch 12 missiles together or separately from each launcher. Each battery consists of three launchers and a command vehicle.

IAI began work on development of UAVs in the 1980s, when the first models were produced. “The loitering missile is like a scalpel that accurately knows how to gouge the eyes of the enemy,” said a source in IAI, who  also revealed the Green Dragon, a smaller loitering missile. The Green Dragon was designed to provide field units at the battalion and division levels, as well as special units, full independence in both up-to-date situational intelligence collection and the ability to finish the fight at a low cost.

IAI said that the Green Dragon is actually an electric silent loitering munition that can operate for up to 90 minutes, during which time the operator can collect and attack targets at a range of up to 40 kilometers. The munition gives the operator the option to stop the attack at any stage and get back to the task of intelligence collection to prevent collateral damage.

Boaz Levy, VP of IAI and general manager of the Missile, Systems and Space Group, said: “The new products will be used to strengthen the tactical capabilities of small infantry units and tactical and special operations, with special emphasis on solving operational problems in urban areas.”

An older model by IAI: