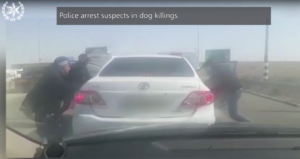 The main defendant was arrested at his home in southern Israel; the 2nd and 3rd defendants, arrested soon afterwards, were all charged with killing 6 dogs, stealing 30 sheep and other property at the Ashkelon Magistrate’s Court.
– Watch Israel Police special unit perform incredible surgical arrest.

Three people were indicted on charges of stealing 30 sheep from Yakhini, a moshav (rural community) in southern Israel, poisoning five dogs and strangling another dog to death, according to a report released by the Border Police spokesperson on Tuesday.

The indictment comes following an intensive investigation carried out by the Israel Police, Border Police, the Border Police Intelligence Center, and the National Center for Intelligence and Investigations of Agricultural Crime. Police used all available means to catch the defendants and connect them to the charges, which include killing six dogs, and stealing sheep and other property.

The investigation began on December 19 when police received a complaint that 30 sheep has been stolen from the moshav.

“When we arrived at the scene, we saw a terrible sight,” recalled one of the responding officers. “Five dogs lay poisoned and dead and another dog was hanged to death. It was clear this was not just an act of theft, but serious animal murder.”

The investigation lasted around six weeks until police were able to identify a main culprit and two accomplices.

“From the moment we saw the bodies of the dogs we were restless,” said the officer in charge of the investigation. “We worked feverishly until the suspects were arrested and the indictments were filed.”

After the theft of the sheep in December, the central defendant and his accomplices committed several other offenses, the last of which took place as recently as early this month.

The main defendant was arrested at his home in southern Israel; the second and third defendants were arrested soon after.

On February 16, the Police filed indictments against the three in Ashkelon Magistrate’s Court.

The thieves left a dog to hang to death by a metal chain. – Photo: Israel Police Spokesperson’s Division

The indictments indicate that the suspects arrived on Moshav Yakhini on the night of December 18 and poisoned the farmer’s five dogs. Later, the central defendant wrapped a metal chain around a sixth dog, hanging him to death on a pole. After that, they stole 30 young sheep with an estimated value of tens of thousands of shekels.

Later, the same group was caught trying to break into the agricultural farm of the Z’rua settlement in the Negev, from where they planned to steal agricultural vehicles. When they were unsuccessful, they instead broke into the farm house and stole property, including a laptop, clothing and footwear.

That night, they also stole 10 sheep and five goats. The total estimated loss is NIS 45,000.

The indictment also shows that the main defendant arrived at Moshav Yakhini wearing a beekeeper suit. He opened four honey hives and stole 40 combs, causing extensive damage, which is estimated at NIS 6,000.

Another indictment describes the offenses of early February, in which the team broke into a store in Sderot and stole about 320 boxes of cigarettes and a bag of tobacco worth an estimated NIS 35,000.