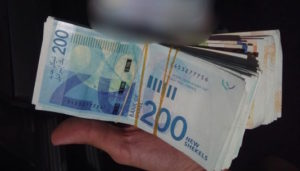 The soldiers saw the suspect leave the Shuafat refugee camp, followed him, and arrested him.

The money is believed to have been sent to him as payment for the fact that one member of his family, a well-known Hamas activist, is serving a prison term in an Israeli prison.

The suspect, a resident of the Shuafat refugee camp in his 40s, was taken for interrogation by the security forces and the money in his possession was confiscated.