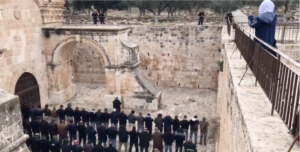 This past March, Regavim, a non-government organization dedicated to the preservation of Israel’s resources and sovereignty through equal and universal law enforcement, petitioned the Supreme Court against the Waqf’s illegal activity at the Temple Mount’s oldest structure.

The Gate of Mercy, or Shaar HaRachamim in Hebrew, also called the Golden Gate, as seen from inside the Temple Mount complex. – Photo: Wikimedia Commons

The Waqf is the Jordanian body which administers the Temple Mount.

Reacting to Sunday night’s events, Regavim’s spokesperson pointed out that the government’s behavior over the past several months has created the abysmal situation on the Temple Mount: The Waqf has established a new mosque on the Temple Mount – the fourth new Muslim place of worship to spring up under the status quo arrangement – in a manner that violates the law as well as the rights of Jews to visit and worship at Judaism’s holiest sites.

The Al-Aqsa Mosque and its area of ​​144 dunams belongs exclusively to Muslims, and an Israeli law or court have no authority over it.

In addition, Israel Police testified that in recent weeks, the Waqf has continued to carry out illegal construction and other work at the site – despite the closure order issued by the Jerusalem Magistrates Court this past March, which ordered the complete closure of the Golden Gate structure. Court orders and status quo arrangements notwithstanding, the Waqf has continued to transform the site: A loudspeaker system was installed to enable the Muslim call to prayers; new prayer rugs were installed; chandeliers were hung – complete with new electrical wiring and a fuse box to supply a steady supply of power, and more.

When Regavim first appealed to the Supreme Court against the creation of a new mosque at the site, Justice Menachem (Meni) Mazuz gave the government a full 90 days to respond to the petition. Recently, Regavim returned to the Supreme Court, requesting an injunction that would prevent any further changes at the Golden Gate until the case is heard. A hearing of this second petition was scheduled for early July, but at the last moment was postponed until late September – nearly half a year after the original petition was filed. Meanwhile, the Waqf continues to carry out construction and renovation work, as evidenced by the room dividers that nearly made their way into the mosque last night.

Yakhin Zik, Director of Operations at Regavim noted: “When the State itself fails to enforce a closure order issued by the court – at the State’s request! – and when Supreme Court justices delay the hearing of our petition for months on end, it is hardly any surprise that the Waqf hears the message loud and clear: Do whatever you want, because you will not be held accountable before the law.”