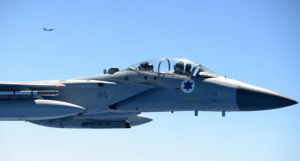 There were no injuries or damages, the IDF said.

Warning sirens rang out across the city, sending residents fleeing for cover, before Iron Dome went into action. It was the second rocket attack by terrorists in Gaza within a few hours.

Earlier Friday,  a Palestinian rocket was fired from the Gaza Strip exploded in Sderot, causing damage to a home and a nearby bus.

Rocket sirens sounded in the western Negev town as well as surrounding localities shortly after sunset as Jews in Israel sat down for Sabbath dinner.

Police spokesman Micky Rosenfeld said a rocket exploded in Sderot, causing damage but no injuries. A bus in the southern city sustained damage in the attack.

The IDF added that it detected a single rocket launched from Gaza.

According to reports, the rocket struck the front yard of a home in Sderot, causing light damage to the residence and a bus that was parked nearby. There are believed to be no injuries.