Israeli warplanes struck rocket-launching targets in the Gaza Strip before dawn on Sunday, the army announced.

According to the IDF Spokesperson’s Unit, IAF aircraft hit 10 targets in central and southern Gaza.

Earlier on Saturday, IDF chief of staff Lt.-Gen. Benny Gantz visited the northern Gaza border region on Saturday and met with military forces operating in the sector. Gantz spoke with infantry and tank unit commanders and examined preparations underway for a possible escalation.

Gantz was accompanied by OC Southern Command Maj.-Gen. Sami Turgermeran, as well as the commanders of the Planning Branch and C4i Branch.

The IDF chief said Hamas bears responsibility for ongoing rocket fire from Gaza, and the the IDF is prepared to provide any necessary response to ensure that southern residents can lead routine lives. 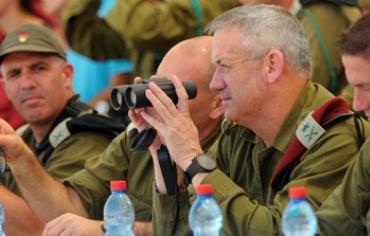 “We’ll know how to respond with much force if quiet isn’t returned to the area,” Gantz said.

Three rockets were shot down over Ashkelon after the rocket defense system intercepted a projectile fired at Beersheba.

Another rocket fell in an open area near Ashkelon, and a second one exploded in Sha’ar Hanegev.

Shortly afterward, the Israel Air Force struck Gaza terror operative who was preparing to fire a rocket at Israel. The terrorist had fired rockets at Ofakim in recent days, the IDF said.

Earlier in the evening, the IAF struck three terror sites in southern Gaza Strip in response to a continuous barrage of rockets fired at southern Israel throughout the day.

“The IDF is prepared to defend Israeli citizens from any threat and will continue to act decisively and as long as necessary and until quiet and routine living standards are restored,” the IDF Spokesperson’s Unit said in a statement.

The military placed the onus on Hamas for terror activities emanating from the coastal Palestinian enclave.

Palestinian rocket and mortar fire continued to afflict parts of southern Israel throughout the weekend, with some 30 projectiles falling in areas close to the Gaza border.

A soldier was injured by shrapnel from a projectile in Eshkol on Saturday. Paramedics evacuated him to hospital for treatment.

By Saturday evening, 12 rockets fell in Eshkol and Sdot Negev, and the Iron Dome rocket defense system intercepted a projectile over the town of Ofakim.

The regions of Sdot Negev and Eshkol came under regular projectile fire throughout the day.

On Friday too, Iron Dome batteries went into action. Two interceptions of rockets occurred over Ofakim, and one over Sderot.

On Friday, terrorists in the Strip fired 14 rockets at Israel.

The IAF also struck targets in the southern Gaza Strip on Friday evening in retaliation for the Palestinian rocket barrage that pounded the South.