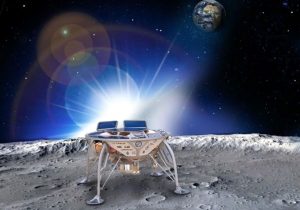 Following the U.S., China & the U.S.S.R., Israel’s SpaceIL team for Google’s Lunar XPRIZE competition plans to land a dishwasher-sized vehicle in late 2017, to hop across moon’s surface (rather than rove like others) for a $20 million prize.

Israel is scheduled to become the fourth country to land a spacecraft on the moon, with a launch planned for the end of 2017 by billionaire businessman Elon Musk’s SpaceX company.

The scheduled launch is also set to send several satellites into space, but the Israeli spacecraft is the only one designed to continue to the moon.

The dishwasher-sized spacecraft was built by the Israeli SpaceIL team for Google’s Lunar XPRIZE competition, which aims to promote space technology and interest in the private sector.

Thanks to advanced innovation and engineering, the Israeli team was the first to reserve a spot for a space launch out of 33 teams that began the competition. Only five teams remain that have clinched spots on space launches, but all the others are set for after SpaceIL’s scheduled launch at the end of 2017.

The “ticket to the moon” cost the team over $10 million, a sum reached with funding by the group’s two main benefactors: Morris Kahn’s Kahn Foundation and Dr. Miriam and Sheldon Adelson’s Adelson Family Foundation.

After landing on the moon, the spacecraft is expected to take photos and videos of the moon and broadcast them to Earth. The spacecraft is designed to travel 500 yards across the surface of the moon by hopping, instead of roving like other spacecraft in the competition. If all goes as planned, SpaceIL will meet the conditions of Google’s XPRIZE competition and win $20 million. The team plans to use the prize money to promote science in Israel.