Israel’s ‘BERESHEET’ ready for launch, and going to the moon TONIGHT!

If launch is successful

, Israel will be the 4th country to land on the Moon, after the U.S.,former USSR and China.
– Due to Israeli technology, the spacecraft is the smallest such craft by weight and least expensive.

Israel will take its first step to the moon late Thursday night, as the lunar spacecraft Beresheet launches from the coast of Cape Canaveral, in a mission that, if successful, will place the Jewish state in an exclusive club of nations capable of landing on the lunar surface.

Beresheet – Genesis in English – will be launched at 3:45 a.m. Continue Reading »

Thursday’s launch to the moon will put Israel with US, Russia & China

If Thursday’s launch of Israel’s Genesis spacecraft is successful, Israel will become the 4th country to land on the moon.
• Genesis technology makes it the lightest, least expensive craft to venture to the moon.

A nonprofit Israeli consortium said Monday that it hopes to make history this week by launching the first private aircraft to land on the moon.

SpaceIL and state-owned Israel Aerospace Industries told a news conference that the landing craft – dubbed “Beresheet” (Genesis) – is scheduled to take off from Florida, propelled by a SpaceX Falcon rocket on its weekslong voyage to the moon. Continue Reading » 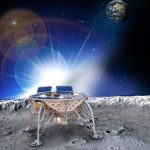 Following the U.S., China & the U.S.S.R., Israel’s SpaceIL team for Google’s Lunar XPRIZE competition plans to land a dishwasher-sized vehicle in late 2017, to hop across moon’s surface (rather than rove like others) for a $20 million prize.

Israel is scheduled to become the fourth country to land a spacecraft on the moon, with a launch planned for the end of 2017 by billionaire businessman Elon Musk’s SpaceX company.

The scheduled launch is also set to send several satellites into space, but the Israeli spacecraft is the only one designed to continue to the moon. Continue Reading »