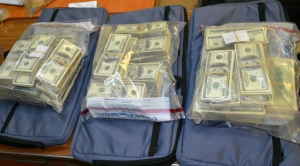 The investigation, a cooperative effort between the Israel Defense Forces, the Shin Bet security agency and the Israel Police, was placed under gag order, lifted Thursday.

The investigation revealed that the money transferring mechanism began operating in 2016, set in motion by Muhammad Maher Badr, a senior Hamas official in Hebron and a member of the Palestinian Legislative Council. Badr recruited two messengers, Mussab Hashlamoun, a Hamas operative from Hebron who was sent to Turkey under the pretense of business, and Taha Othman, also a resident of Hebron.

Two of Hashlamoun’s colleagues — his brother Yusri and Omar Kimri — maintained ties with Majed Jabah, a Hamas operative in the Gaza Strip, originally also from Hebron, who coordinated the transfer of funds from Turkey. Jabah was released from an Israeli prison in the 2011 prisoner exchange that saw IDF soldier Gilad Schalit freed from Hamas captivity in Gaza.

Hashlamoun and Othman met several times with Haroun Naser al-Din, a Hamas headquarters official in Turkey who was also released in the Schalit deal.

Naser al-Din gave the messengers tens of thousands of dollars to buy goods in Turkey. The two imported the goods through international delivery companies and sold them in Hebron. After deducting their fee, the profits from the sales were then handed to Hamas operatives in Hebron. As part of his operation, Naser al-Din told the messengers to speak to Hamas terrorists in Hebron and offer them money from the headquarters.

The Military Prosecution is expected to request indictments in the case in the near future.

“Quite often, Hamas operatives abroad recruit relatives of Hamas members in the field, or enlist the help of merchants and businesspeople, who end up paying a steep personal and financial price for this activity,” the Shin Bet said.

“The Shin Bet security agency, in cooperation with the IDF and the Israel Police, will continue to take action to expose and thwart this terrorist activity orchestrated by Hamas operatives abroad and in the Gaza Strip,” the agency said.