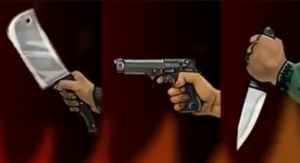 One of the terrorists was identified as a Palestinian police officer.

The Palestinian Health Ministry identified the terrorists as Nihad Waked and Fouad Waked, both aged 15. They were from the same extended family in al-Araqa, but were not close relatives.

Later, at the Mazmoriya security checkpoint near Har Homa on the outskirts of Jerusalem, a Palestinian terrorist wielding a knife charged toward a group of Border Police officers. One of the officers opened fire, killing the terrorist.

The Palestinian Health Ministry identified the terrorist as 17-year-old Naim Safi of the village of Abadiya near Bethlehem.

On Sunday evening, a 21-year-old Palestinian woman tried to stab a Border Police officer at a checkpoint near the Cave of the Patriarchs in Hebron. The officer pushed the attacker away and shot her, seriously wounding her. She was transported to Shaare Zedek Medical Center in Jerusalem for treatment.