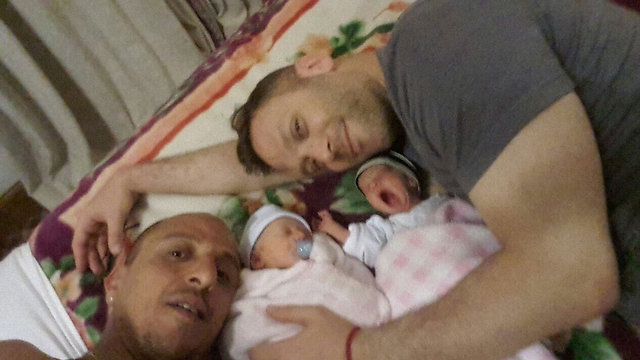 The babies will fly to Israel from India. The ministry said the process was complex but was being undertaken “transparently with the Nepalese.”

President Reuven Rivlin said on Saturday night, “Our hearts and thoughts are with the nation of Nepal who are dealing with a terrible disaster, and with our loved ones who are in danger and distress.”

Rivlin added that “Israel will extend its hand with a will to aid in search and rescue of the many injured.”

A search and rescue unit from Home Front Command was to leave Israel on Saturday night to Nepal. The unit will likely include a full plane with the materials for a field hospital to be constructed in Kathmandu.

The surrogacy procedure and paternity confirmation in Israel is complicated. According to the law, if the babies are born to a Nepalese surrogate mother, the newborn is a Nepalese citizen. In order to allow for their flight to Israel, a DNA test must be performed to prove the father is an Israeli citizen.

Only then will the Israeli embassy issue the newborn an Israeli passport. Interior Minister Gilad Erdan directed the ministry to remove all potential obstacles in order to allow for the newborns’ speedy transportation to Israel.

One of the parents, Israeli musician Ohad Hitman, said that while parents were able to rescue their newborns from the NICU before its second floor collapsed, they were now without medicine or hot formula and needed help from the Israeli Foreign Ministry.

“I do not know how we will make it through the night here because we are almost through with our supplies,” he said.

The Foreign Ministry will offer Israelis a ride home on the plane. Meanwhile, the plan has yet to be set in motion because the local airport remains closed.

Hundreds were killed in an earthquake measuring 7.9 magnitude which struck east of Pokhara in Nepal on Saturday. The earhquake caused buildings and centuries-old temples in the capital Kathmandu to collapse and cut open roads in the worst tremor in the Himalayan nation in 81 years.

Several Israelis were lightly injured in the deadly earthquake in Nepal according to the Foreign Ministry. The number of Israelis designated ‘out of reach’ was raised to 250.

Eliav Zakai, whose son Shahar is a backpacker stuck in a trek in Kyanjin Gompa in Nepal, said at least 13 Israelis and other nationals were stuck in the area in a village that was completely destroyed in the quake. Zakai said the Israelis, texting home using a satellite phone, reported some locals were killed from their group.