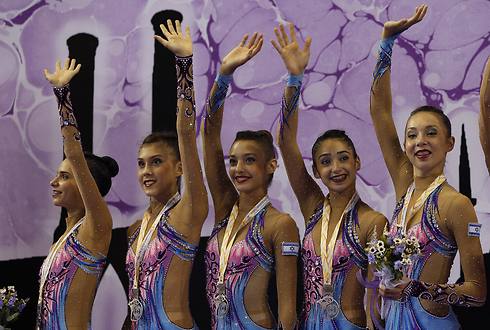 The team, which include Alona Kushewtzki, Ida Meirin, Yuval Pilo, Katia Levín, Karina Lichber and Lihi Shuchtowitz, ascended to the finals following a great performance in the preliminaries which gave them the fifth spot in the all round competition and the ticket to the top eight.

This is the first time in history that the Israeli National Rhythmic Gymnastics team takes the silver medal in the world championship, and the second time on the podium in the most important competition in the world after winning the bronze medal in 2011 with the hoop and ribbons routine.

In the clubs’ routine, the team went up fifth on the mattress and pulled off an amazing number without even one mistake. It was one of the only teams, together with Spain, that kept their focus throughout the routine without dropping the club.

The Israeli national team was rebuilt after the London Olympic Games in 2012. However, the final composition of its members was formulated only in the past year, but since than the girls are raising the bar in each competition.

The girls didn’t have much time to celebrate their win, as shortly after they needed to get ready for their second final routine combining balls and ribbons to the music of the “Adams Family”.