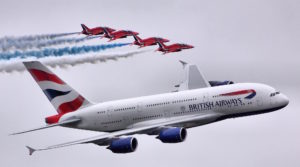 British Airways said it was suspending its London to Tehran service “as the operation is currently not commercially viable.”

Air France will stop flights from Paris to Tehran from Sept. 18 because of “the line’s weak performance,” an airline spokesman said. “As the number of business customers flying to Iran has fallen, the connection is not profitable anymore.”

Air France is part of the Air France-KLM group. Dutch airline KLM announced in July that it was halting flights to Tehran.

German airline Lufthansa said it has no plans to stop flying to Iran at this time.

“We are closely monitoring these developments. For the time being, Lufthansa will continue to fly to Tehran as scheduled and no changes are envisaged,” it said in an emailed statement.

“Today we learned that three major carriers, British Airways, KLM, and Air France, have discontinued their activities in Iran. That is a good thing. More [airlines] should follow, more will follow, because Iran should not be rewarded for its aggression in the region, for its attempts to spread terrorism far and wide,” Netanyahu told a news conference during a visit to Lithuania.

“Considering the high demand, the decision by the airline is regrettable,” Hamid Baeidinejad tweeted.