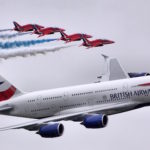 British Airways said it was suspending its London to Tehran service “as the operation is currently not commercially viable.” Continue Reading »