Israel to call to arms 40,000 reservists for extended Gaza operation

After Hamas ignored Jerusalem’s ceasefire attempts in it’s onslaught of hundreds of rockets aimed at Israeli civilian centers, the Israel cabinet votes to call up 40,000 reservists.

The security cabinet has voted to call up some 40,000 reservists in preparation of a possible ground operation in Gaza Strip as part of Operation Protective Edge, hours after Prime Minister Benjamin Netanyahu ordered the military to “take off the gloves” in its confrontation with Hamas. 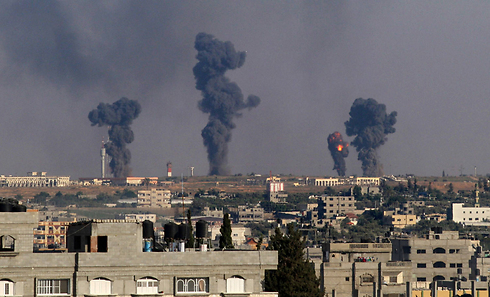 Netanyahu placed responsibility for the current round of fighting on Hamas, and said “Hamas chose escalation and it will pay a heavy price for it.”

Senior political sources close to Netanyahu said he has ordered the defense establishment to conduct a “continuous, long and forceful operation in Gaza.”

The decision to call up reservists was taken at the request of IDF Chief of Staff Lt.-Gen. Benny Gantz, and is intended to allow reservists to take over part of the duties currently being fulfilled by conscripted soldiers, who will now avail themselves to the operation itself.

According to the source, Netanyahu told the IDF to go “all the way,” saying “evening a ground operation was currently on the table.” According to them, such an operation was far from certain, but that the operation’s goal was to increase deterrence and deal Hamas a significant blow.

Defense Minister Moshe Ya’alon for his part said “we are prepared for an offensive against Hamas, which will not end in a couple of days.”

Tuesday morning Netanyahu arrived at the IDF headquarters in the Kirya compound in Tel Aviv for a meeting with the defense heads of Israel’s establishment.

Ya’alon said after a meeting with the defense establishment’s top echelon that he is going to implement an emergency protocol in communities and councils within 40km (about 25 miles) from the Gaza Strip border, expanding economic benifits as well as the IDF’s authorities in the civilian areas.

Interior Minister Gideon Sa’ar told Ynet Tuesday that IDF should take harder offensive measures in the Gaza Strip “Israel need to step it up and operate with more ferocity against Hamas.” Sa’ar also said “I wouldn’t rule out possibility of rockets at Tel Aviv.”

Interior Security Minister Yitzhak Aharonovich, a member of security cabinet, also commented on the operation, and said: “The situation in the south has become insufferable, we cannot allow over a million citizens be held hostage in bomb shelters.”

According to him, Israel attempted to reach a cease fire deal with Hamas, but to no avail: “We attempted to send them a clear message, and the moment they were ignored by Hamas we stepped up our response.

“Hamas is responsible for bring back the calm,” he said.

According to Arab reports, Egypt is working to mediate a ceasefire between Israel and Hamas. The terms of the deal are reported to be a halt in rocket fire in return for a halt in aerial assaults in the strip.

“The IDF has a free hand to operate, within a set of predefined steps. The political echelon has given the IDF everything it has requested. 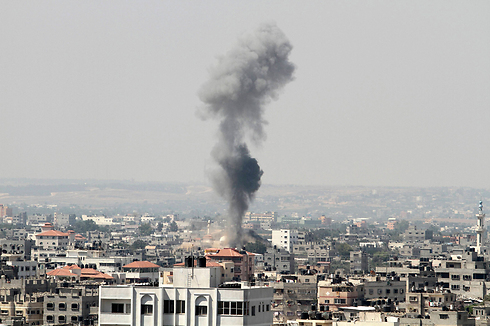 Netanyahu had earlier pledged “to do whatever is necessary” to restore quiet to southern Israeli communities although he cautioned against any rush towards wider confrontation with Hamas, whose arsenal includes long-range rockets that can reach Israel’s heartland and its business capital, Tel Aviv.

The surge in violence has raged since the kidnapping and killing of three Israeli youths last month in the West Bank and a Palestinian teen last week. Israel has arrested six Jewish suspects over the latter case.

Air raid sirens wailed as far north as the outskirts of Tel Aviv and Jerusalem on Monday night. Israeli police said those were false alarms but the military said rockets had triggered alerts as far as 80 km (50 miles) away, the farthest of the latest crisis.

Hamas claimed responsibility for firing rockets at Israel on Monday for the first time since a 2012 war with Israel that ended in an Egyptian-brokered truce.

The group’s death toll on Monday had also been the highest Hamas suffered since the 2012 fighting.