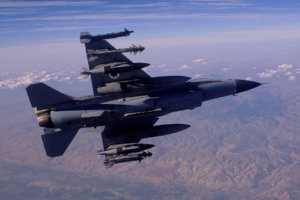 Some 1.8 billion leva (NIS 3.8 billion) will cover the cost of the fighter jets which would be acquired by Sofia in two stages of eight each, as well as ground handling, training and logistical support.

“The holding of the joint training activities will lead to increased interoperability and expansion of military co-operation between the armed forces of Bulgaria and Israel, as well as to the improvement of the preparation of the units of the Bulgarian Air Force,” read a government statement at time.

Israel is also set to sell F-16s to Croatia which officially chose the Israeli jets on March 29 in a deal worth close to $500 million. According to local press, the 12 F-16C/D Barak jets will be called Flash and Storm after the two Croatian military operations against Serbia in 1995.

In December 2016 Israel retired its fleet of F-16A and F-16B (Netz) fighter jets. The planes had been the backbone of the IAF for 36 years. The F-16B variants are two-seat aircraft flown by a pilot and navigator, unlike the F-16A which has only a pilot.

Israel’s F-16A/Bs were originally destined for the Imperial Iranian Air Force, but with the fall of the shah following the 1979 Iranian revolution and the subsequent rise of the Islamist fundamentalist regime, and the signing of the Camp David accord between Israel and Egypt, Jerusalem finalized a deal to acquire the advanced jets from the United States under the Peace Marble I Foreign Military Sales program.

The first four F-16A/Bs landed in Israel in July of 1980 and achieved initial operational capability a few weeks later.

With the F-16C/D Barak, and one of the most advanced F-16s ever built, the F-16I Sufa, Israel flies the largest contingent of F-16s outside the United States, with close to 300 jets. All the aircraft have been heavily modified with Israeli-made avionics, self-protection systems, radar and advanced weapons such as the  Python 4 and 5 air-to-air missiles and the Popeye and SPICE (Smart, Precise Impact, Cost-Effective) guided munitions.