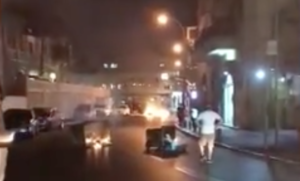 Israel has grown so fearful of upsetting the status quo with the Arabs living both inside and surrounding the country that it is willing to quietly sacrifice the safety of its own Jewish population, the very people the state was established in order to protect.

Late last month, a 20-year-old Arab criminal from the Tel Aviv suburb of Jaffa was shot and killed by police while attempting to evade arrest. The incident marked a point of severe tension in a mixed Jewish-Arab town otherwise known as a model of coexistence.

Port of Jaffa in Jaffa, Israel, with Tel Aviv in the background – Photo: Noam Armonn/Wikimedia

It’s the kind of story journalists salivate over, and so two of Channel 2 News’ top correspondents, a reporter and a cameraman, arranged to attend the funeral. What could go wrong? We’re talking about Jaffa, not Palestinian Authority-ruled, Hamas-infested Hebron.

Tellingly, the funeral procession did very much resemble those seen in Hamas-dominated areas, complete with chants of “Allah hu-Akbar” from a mob that just looks like it’s itching for a fight. And since they were the only Jews in sight, the two Channel 2 correspondents quickly went from invited media guests to targets of murderous violence.

The irony of the situation must be highlighted: These young Arabs were upset over alleged police brutality, and so demonstrated their frustration by attempting to beat to death two innocent Jews.

The lead reporter provided his harrowing first-hand account via Facebook from his hospital bed in Tel Aviv:

Many thanks to all the friends, colleagues and dear followers who contacted me and asked how I’m doing. I can’t reply to everyone, but you have warmed my heart this whole day.

We were in a lynch yesterday. I and the cameraman Gal Zaetman went to cover the funeral of the Jaffa youth who was shot by police. As is our habit, we tried to bring the pictures and voices from the under-belly of the area, in order to convey the situation and to bring to our viewers the most objective pictures.

We marched along with them. Hundreds of people, mostly youths, marched behind the vehicle carrying the body of the youth, and they were calling “Allah u-Akhbar”. Since we had been invited there by some of them, I felt – apparently without justification – that it was fairly safe.

In one second, everything burst into flames. It started with Gal; they began hitting him. They took his camera and smashed it. He received punches and kicks but succeeded in escaping.

The minutes were pressured, but I remember (oddly) having clear and analytical thoughts. I remembered how on a safari trek in South Africa, the guide advised us that if a wild animal starts to chase you – don’t run; this only encourages its natural predator instinct. So, I stood my ground with those who had beaten Gal, and I held up my hands as a sign of apology. I thought that if I just asked forgiveness for having disturbed them, I would be able to leave in peace.

There was no one to talk to.

The first punch that landed on my face was still tolerable. Again, the analytical thought: Don’t return the punch, even though you can, even though you know how. It will only fan the rage of the crowd.

Suddenly another punch, and another kick. Two held me down to the ground, others ripped my shirt. Another man was grasping me tightly with his arms around my throat. He brought his mouth down to my arm and bit it, hard.

And now, a different clear thought: The time period has already expired for what I would have estimated is the average time for an attack on a man who has surrendered and is lying on the ground. I am being lynched.

I don’t know how long this lasted. It could have been five minutes, or maybe 15 seconds. I have no idea. Nor do I have an idea how many people were participating in this celebration. Maybe five, maybe 15.

I was alone. I understood that I needed to escape from there as soon as possible. But I couldn’t see at all out of one eye, and my left leg was too weak for me to drag myself out of there. Dozens of people were around me, shouting and calling out in bloodlust, which I hear as though I’m sitting in a closed room and they’re standing outside the door.

Suddenly someone pulled me by the hand. An anonymous person, whose face I can’t remember, yanked me out of the circle. “Run,” he said to me. I started to run. The beasts had apparently had their fill, because no one chased me.

At Ichilov Hospital I was diagnosed with lacerated shoulders, ribs that felt better than they were, a black eye and bruises all over my body. My doctors said to me, “It was only a miracle that nothing worse happened,” applying the media cliché that I try so hard to avoid every day.

The time is still ahead to draw lessons from this incident, but I do not regret going there. My job as a journalist is to bring to the viewing public the real picture, the authentic voices that can’t be accessed from the outside.

The Jaffa crowd that I encountered was inflamed and enraged. They are not the only ones inciting against media people. We will continue to be there, reporting with integrity and preserving our job as gatekeepers – even opposite an enraged and inflamed crowd, and even opposite whoever is inciting them.

(Translated from Hebrew by Hannah Weiss in her coverage of the near-lynch for Kehila News.)

The international press didn’t touch it at all, though had the roles been reversed (Jews lynching Arab journalists), you can be certain it would have made headline news around the globe.

In Israel, only a couple English-language outlets covered the story. The mainstream Hebrew press carried it, but relegated the attack to second-tier news. Even Channel 2 failed to adequately highlight what had happened to its own reporters and what that said about race relations in Israel.

The reason for this is painfully obvious for those living in this land. Israel has grown so fearful of upsetting the status quo that its government and media organs will turn a blind eye even to attempted murder. The result is that there are today a great many areas in the Jewish state where Jews tread at their own risk.